More than 140 countries are taking part in talks to deter big companies from shifting their profits to low-tax jurisdictions. 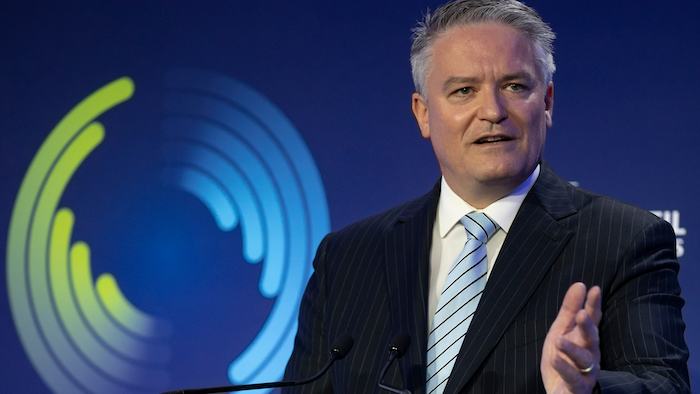 Mathias Cormann, the new secretary-general of the Organization for Economic Cooperation and Development, at the handover ceremony at OECD headquarters, Paris, June, 1 2021.
Ian Langsdon, Pool via AP

PARIS (AP) — The new head of the Organization for Economic Cooperation and Development said Tuesday that he is “quietly optimistic” about reaching an international deal on taxing multinational companies, and he called U.S. President Biden's recent proposal a “game changer."

OECD Secretary-General Mathias Cormann made the remarks at a news conference after taking over from Angel Gurria, who left office after leading the Paris-based organization since 2006.

Cormann, asked about the prospects for a global taxation deal, replied, "Clearly there are a lot of conversations still on the way. You know, you don’t get too far ahead of yourself, but I’m quietly optimistic.”

More than 140 countries are taking part in talks convened by the OECD that focus on a global minimum for corporate taxation to deter big companies from shifting their profits to low-tax jurisdictions, and on taxing multinationals that earn substantial revenue in countries where they have no physical presence, such as internet retailing and digital advertising companies.

The talks had stalled over issues such as whether companies could choose to opt in to any new system, a proposal put forward by the United States under the administration of former President Donald Trump.

Biden has proposed setting at least a 15% minimum global corporate tax that would put a floor under tax rates and end what Treasury Secretary Janet Yellen has called a “race to the bottom” in which tax havens use low rates to attract revenue. The global rate, part of a tax proposal aimed at helping pay for Biden's infrastructure program, also would raise the U.S. corporate tax rate from 21% to 28%.

“I think the approaches taken by the Biden administration in relation to this issue have been a game changer," Cormann said following a ministerial-level. meeting of the OECD Council.

“I think that we are in a much better position than we were towards the end of last year," he said. "I’m quietly optimistic that with the level of goodwill that was demonstrated by all during the meeting today, if we continue to carry this forward, that there will have an opportunity for a sensible consensus.”

The OECD, an international organization with 38 member countries, estimates that governments lose up to $240 billion a year to companies that shift earnings among countries to lower their tax bills.

Competition to cut corporate tax rates has been “undermining the United States’ and other countries’ ability to raise the revenue needed to make critical investments,” according to the U.S. Treasury.