Although the recovery appears to be strengthening, there are still many pockets of weakness in the U.S. economy. 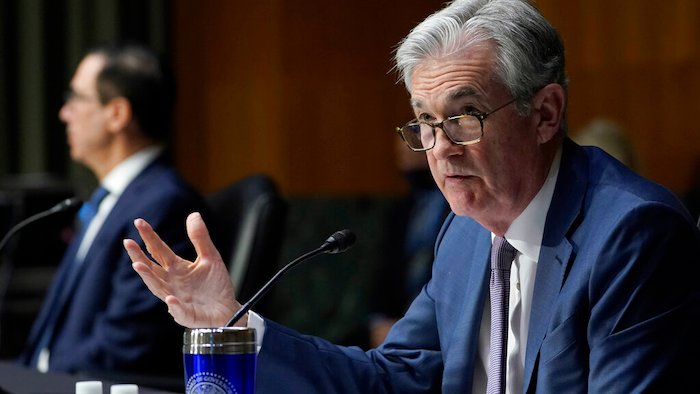 WASHINGTON (AP) — Federal Reserve Chairman Jerome Powell says the economic recovery from the coronavirus pandemic has progressed more quickly than expected, but the central bank does not intend to let up in its support efforts.

In congressional testimony released Monday, Powell said that even though the recovery appears to be strengthening, there are still many pockets of weakness in the U.S. economy.

“The sectors of the economy most adversely affected by the resurgence of the virus and by greater social distancing remain weak,” he said in his remarks prepared for an oversight hearing of the House Financial Services Committee on Tuesday.

“The recovery is far from complete, so, at the Fed, we will continue to provide the economy the support it needs for as long as it takes," Powell said.

Powell noted that the unemployment rate is still elevated at 6.2%, a statistic that does not fully reflect the number of jobless Americans who have given up and dropped out of the labor force.

He said the Fed will “not lose sight of the millions of Americans who are still hurting, including lower-wage workers in the services sector, African Americans, Hispanics and other minority groups that have been especially hard hit.”

At its meeting last week, the Fed kept its benchmark interest rate at a record low of 0% to 0.25%. Even though it significantly raised its economic forecast, it continued to signal that its benchmark rate would remain where it is through 2023, giving a boost to financial markets.

Powell and Treasury Secretary Janet Yellen will testify Tuesday before the House panel and then testify Wednesday before the Senate Banking Committee in oversight hearings that were mandated by Congress when it passed relief legislation last year.

Powell gave credit to the prompt action by the Federal Reserve, local governments and businesses. He also cited congressional passage last March of the initial COVID-relief packages that provided $1,200 in individual support payments, emergency unemployment assistance and billions of dollars in forgivable loans to small businesses.

“While the economic fallout has been real and widespread, the worst was avoided by swift and vigorous action,” Powell said.

The situation now appears to be improving, he said.

“Since January, the number of new cases, hospitalizations and deaths has fallen and ongoing vaccinations offer hope for a return to more normal conditions later this year,” Powell said in his prepared testimony.

Powell noted that the Cares Act passed by Congress a year ago had provided the Treasury Department with $454 billion that it could use as a backstop for emergency lending programs created by the Fed.

In his testimony, Powell said that the lending programs established by the Fed had helped to unlock almost $2 trillion in credit to support businesses, cites and states.

In a rare split between the Treasury and the Fed, then-Treasury Secretary Steven Mnuchin announced in November that he would let five of the emergency lending programs expire at the end of 2020, a move that Democrats charged was politically motivated to keep the incoming Biden administration from having all the economic support the Trump administration had enjoyed.

Those Fed programs have expired, but Congress earlier this month approved an additional $1.9 trillion relief package that had been pushed by the Biden administration.

Powell said that the Fed would soon close down its remaining emergency lending programs although it has announced that it was extending its Paycheck Protection Program lending facility for another quarter to support more loans to small businesses.