Feds Want to Fix Canal, but Town Lives Off the Leaks

Local residents have long used water leaking from the century-old canal to fill their own wells. 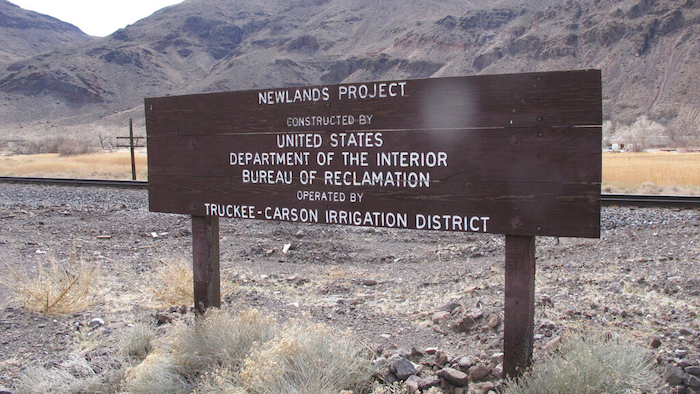 FERNLEY, Nev. (AP) — A Nevada town founded a century ago by pioneers lured to the West by the promise of free land and cheap water in the desert is trying to block the U.S. government from renovating a 115-year-old earthen irrigation canal with a plan that would eliminate leaking water that local residents long have used to fill their own domestic wells.

A federal judge denied the town of Fernley’s bid last year to delay plans to line parts of the Truckee Canal with concrete to make it safer after it burst and flooded nearly 600 homes in 2008.

Now, lawyers for the town a half-hour east of Reno have filed a new lawsuit accusing the U.S. Bureau of Reclamation of illegally failing to consider the expected harm to its municipal water supply and hundreds of private well users who tap into the groundwater based on what they say are binding water allotments, some dating to World War II.

Safety aside, the bureau says the loss of federally owned water from the dirt canal is a waste of U.S. taxpayers’ money. The city says the government shares responsibility for their dependence on the unintended subsidy provided by the seepage, partly because it’s never before objected.

“Fernley has a right to continued recharge from the Truckee Canal under the public use doctrine because the seepage conditions have continued for 115 years,” the lawsuit stated.

Over time, local users have become “utterly reliant on seepage from the canal to keep the aquifer recharged and in a healthy condition,” the suit said. It says Fernley spent $40 million on a state-of-the-art water treatment facility based on that reliance.

“You (the government) created the system and now you are essentially taking it away and claiming it is not your problem,” former Fernley Mayor David Stix Jr. told The Associated Press Friday.

A decision is crucial for the town and surrounding farms in the high desert where only 6 inches (15 centimeters) of rain falls annually. And the dispute could have far-reaching implications for the one in five U.S. farmers who use water delivered by federal canals in 17 western states to irrigate an area three times the size of Connecticut.

Built in 1905, the Truckee Canal was part of the Newlands Project named after the Nevada congressman whose legislation led to creation of the Bureau of Reclamation three years earlier. It was the first major irrigation project in the West — intended to “make the desert bloom.”

Fernley’s lawyers say it was a huge success, attracting settlers who developed the West. But they say the new project pulls the rug out from under their descendants in the town of 23,000 where some still raise livestock and grow alfalfa and melons.

The agency says lining the canal at a cost of about $148 million is necessary to prevent another costly disaster like the 2008 canal break. The Truckee-Carson Irrigation District managing the canal system settled a class-action suit for $18.1 million in 2016 with 1,200 victims of the flood that damaged 590 homes.

The agency has studied efficiency of canal linings for decades and in recent years stepped up research of new ways to combat seepage with remote satellite sensing, ground sensors detecting soil moisture and sediment temperature.

Last month, the bureau teamed up with NASA and HeroX, a crowdsourcing platform, to sponsor a two-year contest with a $360,000 prize to foster other innovations.

This week, the bureau awarded $42 million in grants to 55 projects in 13 states from Kansas to Arizona and the Pacific Northwest to improve water delivery efficiency and generate more hydropower.

Bureau officials couldn’t immediately estimate how much water leaks from canals nationally but in neighboring California, it has said one-third of the water passing through a stretch of the All-American Canal is lost to seepage annually — some 168,500 acre-feet (207 million cubic-meters).

One acre-foot (1,233 cubic-meters) of water covers an acre (.40 hectare) — roughly the size of a football field — and a foot deep (.3 meters). Average California households use one-half to one acre-foot of water every year.

In 1985, the U.S. Geological Survey estimated natural recharge, such as from rainfall, in Fernley’s groundwater basin was 600 acre-feet (740,000 cubic-meters) — a fraction of the 18,000 acre-feet (22 million cubic-meters) it estimated was leaking annually into the aquifer from the unlined canal.

The bureau largely agrees with simulations run by an expert Fernley hired in 2018 who estimates 13% of the 400-plus domestic wells in Fernley would dry up in a year if the artificial recharge ends and 71% would stop working over 40 years.

The bureau hasn’t responded to the lawsuit filed March 10 in federal court in Reno but its final environmental impact statement said in September that Fernley “has no legal entitlement to the continued existence of seepage water from the Truckee Canal.”

“The city’s claim of right to seepage water is not valid under Nevada law,” the agency said. “The city’s use of canal seepage is not a valid project water delivery.”