The vessel had far fewer passengers than usual amid coronavirus travel restrictions in the region. 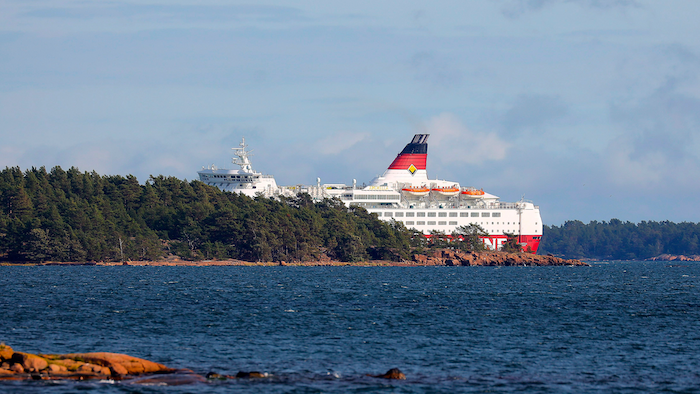 HELSINKI (AP) — A Baltic Sea passenger ferry with nearly 300 people aboard ran aground in the Aland Islands archipelago between Finland and Sweden without injuries Sunday, and rescuers evacuated the vessel's passengers to shore, Finnish authorities said.

“There are no reported human casualties,” Viking Line said in a short statement adding that the situation with the vessel was “stable." The vessel had 200 passengers and a crew of 80 aboard.

The coast guard were alerted to the incident just before 1 p.m. Finnish time, and rescue boats evacuated those onboard to shore. Authorities were investigating why the ferry ran aground.

Viking Line CEO Jan Hanses told the Finnish public broadcaster YLE that the accident was caused either by technical failure or human error.

“Something has gone wrong with the ship's steering," Hanses told YLE, adding that water had leaked into one of the vessel's sections but was unable to specify how bad the leakage was.

The coast guard said it hadn't observed oil leakage in the area as a result of the grounding.

The number of passengers aboard the vessel, capable of carrying up to 2,500 people, was unusually low because of the Nordic region's coronavirus travel restrictions which have badly hit Baltic Sea ferry companies.

The Aland Islands, an autonomous Finnish territory, are midway between the two port cities and M/S Amorella was set to make a scheduled stop there en route to Stockholm.

The archipelago consists of thousands of named and unnamed islands and its shallow waters and narrow passages are particularly tricky to navigate for large ships.

Finnish media reported the M/S Amorella ran aground in the same place in 2013.