Despite the revision, it remained by far the steepest drop in the 50 years. 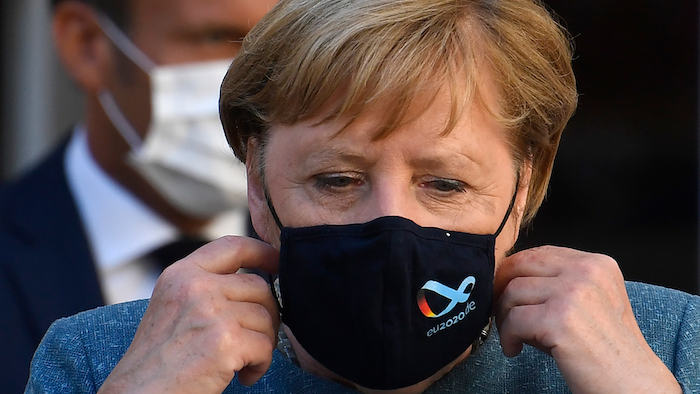 German Chancellor Angela Merkel takes her mask off as she arrives with French President Emmanuel Macron for a press conference at the Fort de Bregancon, France, Aug. 20, 2020.
Christophe Simon/Pool photo via AP

BERLIN (AP) — The German economy, Europe's biggest, shrank by slightly less than originally estimated during the second quarter, the country's official statistics agency said Tuesday — though the 9.7% drop was still easily the worst on record.

The Federal Statistical Office revised the quarter-on-quarter contraction from the 10.1% it initially reported at the end of July.

Despite the revision, it remained by far the steepest drop in the 50 years that quarterly GDP figures have been recorded — easily beating a 4.7% decline in the first quarter of 2009, during the global financial crisis.

The German decline was one of the less drastic second-quarter contractions among Europe's major economies during the wide-ranging coronavirus lockdowns in the spring. France, Italy, Spain and Britain all saw double-digit drops.

The crisis has derailed the German government’s dedication to keeping its budget balanced, long a point of pride. After years in the black, it is borrowing billions to finance rescue and stimulus packages and cover an expected shortfall in tax revenue.

The statistics office also said Tuesday that German authorities spent 51.6 billion euros ($60.9 billion) more than they took in in the first half of the year. That resulted in a budget deficit equivalent to 3.2% of the country's annual GDP, compared with a surplus of 2.7% a year earlier.

The agency cautioned that “only limited conclusions” can be drawn from that figure for Germany's full-year performance.

A separate survey showed a fourth consecutive monthly increase in business confidence as the economy builds momentum. Germany has been gradually relaxing restrictions imposed because of the pandemic for the past four months, though a significant upturn in new infections has caused increasing concern in recent weeks.

The Ifo institute said its confidence index rose to 92.6 points in August from 90.4 in July — a slightly better showing than the 92.2 economists predicted. Managers' assessment of both their current situation and the outlook for the next six months improved, though the improvement in the outlook was relatively small. Ifo's index is based on survey responses from about 9,000 companies.