He pleaded not guilty to a charge of soliciting 10% of potential profits as a bribe for the contract. 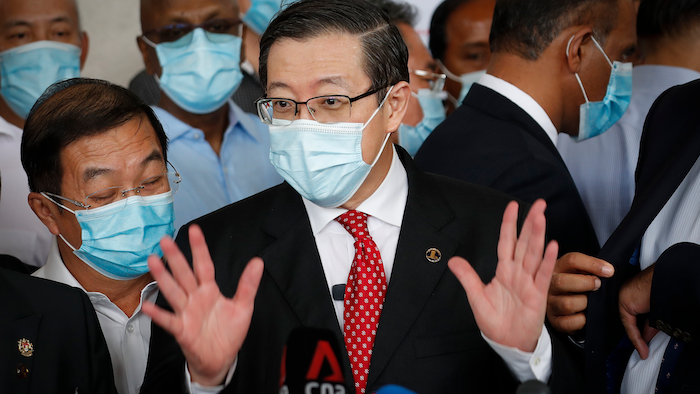 KUALA LUMPUR, Malaysia (AP) — Malaysia's former finance minister was charged Friday with corruption over a $1.5 billion undersea tunnel project, a move he slammed as political persecution by the new government.

Lim Guan Eng, who was part of a reformist government ousted in March, pleaded not guilty to a charge of soliciting 10% of potential profits in 2011 as a bribe for the contract. He was detained late Thursday by the anti-corruption agency after they summoned him for questioning over the project in northern Penang state.

The project was approved during Lim’s tenure as Penang chief minister from 2008-2018, before he became Malaysia's finance minister. The 7.2 kilometre (4.5 miles) tunnel project from Penang island to peninsular Malaysia includes several highways and is to be funded through a land swap of reclaimed prime land.

“This is a baseless allegation and it's politically motivated to tarnish and smear my reputation as well as, of course, my effort to execute my role as an opposition parliamentarian," Lim, 59, told reporters after he was released on bail.

The charge didn't mention how much Lim could have gained. He faces up to 20 years in jail and a fine if convicted. The anti-corruption agency also said that Lim will face two other charges in a Penang court next week, one related to the tunnel project and another in a different case. It didn't give details.

Lim's Democratic Action Party tweeted that the charges against him were political persecution as the project was awarded through an open tender and that no payment had been made.

Construction for the tunnel project hasn’t started yet as the state government is still reviewing the feasibility study.

National Bernama news agency said Lim's wife, Betty Chew, was also detained Friday after she was called to the anti-graft agency in Penang for questioning. Local media quoted her lawyer as saying she has been freed on bail and will be charged with money launderingon Tuesday.

No further details were provided. Local media cited sources as saying Chew will be charged alongside her husband. Anti-graft officials couldn't be immediately reached for comments.

Prime Minister Muhyiddin Yassin took power in March, after he pulled his party out of the ruling coalition and then-premier Mahathir Mohamad resigned in protest. Muhyiddin's new Malay-centric government is supported by graft-tainted parties defeated in the 2018 general election.

Analysts said Muhyiddin faces pressure from ally parties to call snap polls, as his unelected government has only a two-seat majority in Parliament. But it will not be an easy call for Muhyiddin as his party is dwarfed by ex-Prime Minister Najib Razak's Malay party in the coalition. Elections are not due until 2023.

Najib and several senior members from his party have been charged with corruption after their defeat in 2018.

Najib's cases are related to massive looting at the 1MDB state investment fund. He was sentenced late last month to 12 years in prison after being convicted at his first trial, though the sentence has been stayed while he appeals. Najib, who faces four other trials linked to 1MDB, insists the cases against him are political vengeance.