The Benetton fashion family will exit the company that maintains most of Italy's bridges. 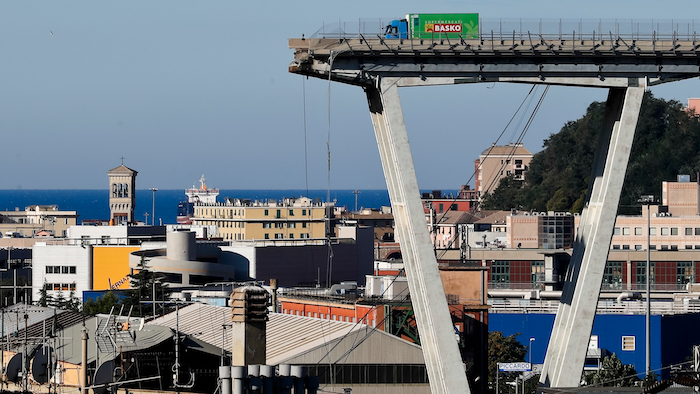 ROME (AP) — Italy’s government said Wednesday it scored a victory in a battle stemming from the deadly 2018 collapse of Genoa’s main bridge, with the Benetton fashion family agreeing to exit the company that manages and maintains most of Italy’s toll roads and bridges.

Italian Premier Giuseppe Conte announced the agreement nearly two years after 43 people perished in the collapse of the Morandi Bridge, a disaster that has been blamed on poor maintenance.

The deal avoids the possibility that the government would revoke the concession Autostade per l’Italia has to manage a huge swath of Italy’s toll roads and bridges.

The 5-Star-led government had threatened to do so in the immediate aftermath of the collapse, but a revocation would have proved financially disastrous for the company and its foreign shareholders, and led to years of costly legal battles to contest the decision.

There was no immediate comment from the Benetton family, Autostrade or its holding company Atlantia SpA.

Conte said that as part of the deal, Autostrade agreed to become a public company and to pay 3.4 billion euros in compensation while also investing more in road maintenance and security.

In a statement on Facebook, Conte claimed a victory in the negotiations and said the government had affirmed a principle throughout: “That public infrastructure is a precious public good that must be managed responsibly and guarantee security and efficient service.”

The Morandi Bridge, which opened in the 1960s, was a key artery that linked Genoa to highways to Milan and France, a vital lifeline for both commercial traffic as well as vacationers bound for the mountains and famous Mediterranean beaches.

A large section of the bridge collapsed on Aug. 14, 2018, killing 43 people and forcing the evacuation of nearby residents from the densely built-up area. It was the deadliest in a series of bridge disasters that exposed the horrific state of Italy’s aging road infrastructure.

The Italian engineer who designed the span, Riccardo Morandi, warned in 1979 that the bridge would require constant maintenance to remove rust given the effects of corrosion from sea air and pollution on the concrete.

After the collapse, it emerged that authorities were well aware the concrete had corroded and that the bridge was structurally compromised. Criminal investigations were opened to ascertain criminal blame, but the government immediately accused Autostrade of neglecting to maintain the span.

At the time, Autostrade apologized and said it was prepared to take action beyond any criminal charges against any managers who might have been responsible.

The government has granted two dozen private companies the right to manage Italy’s highways, bridges and tunnels, but the Benettons' Autostrade is by far the biggest, controlling some 3,020 kilometers (1,876 miles) of highway.

Under the deal reached with the government, the Benetton family will have less than 10% of Autostrade and within a few months will definitively exit the company, known by its acronym ASPI.

“This means the Benettons won't manage our highways. This was our principle objective, and we obtained it," Italian Foreign Minister Luigi Di Maio said.

Conte recently was in Genoa to attend a key stage in the construction of a replacement bridge, this one designed by architect and Genoa native Renzo Piano.