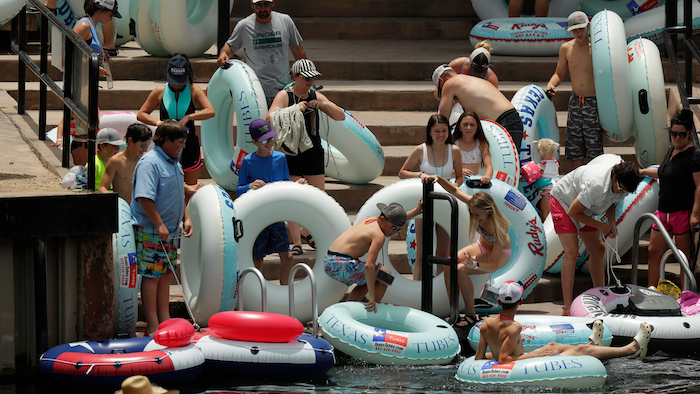 AUSTIN, Texas (AP) — When Texas began lifting coronavirus restrictions, Republican Gov. Greg Abbott didn't wear a mask. He wouldn't let mayors enact extra precautions during one of America's swiftest efforts to reopen. He pointed out that the White House backed his plan and gave assurances there were safe ways to go out again.

The backpedaling is not just in Texas, where Abbott abruptly halted the push to loosen more restrictions and is now urgently telling people to stay home. Arizona Gov. Doug Ducey, also a Republican, did the same, declaring the state “on pause” as hospitals accelerate toward capacity.

As an alarming coronavirus resurgence sets records for confirmed cases and hospitalizations across the U.S. South and West, governors are retreating to measures they once resisted and striking a more urgent tone.

“I think they’re going to have to,” said Dr. Mark McClellan, former head of the Food and Drug Administration. “It doesn’t take most people in a community getting sick to overwhelm health care systems.”

Critics bristle that the actions are too little, or worse, possibly too late as patients fill up intensive-care beds and the U.S. closes in on hitting all-time highs for daily confirmed cases.

And governors are not entirely bending in their resolve: Florida Gov. Ron DeSantis, who until recently had rarely worn a face covering, has said he won’t impose statewide mask orders or delay reopening. And Abbott says shutting down the Texas economy again is a last resort.

The escalating crisis is testing governors — many of them Republicans who aggressively reopened before most of the U.S. — as pressure mounts from their biggest cities, health experts and even friendly business groups. Any move backward could land them at odds with President Donald Trump, who has sought to move on from the virus and return to the campaign stage, all while refusing to wear a mask in public.

A June survey from The Associated Press-NORC Center for Public Affairs Research says many Americans never fully embraced the reopening effort now underway in many states. A majority of Americans still have concerns about contracting COVID-19, and significant shares still support the kinds of public health restrictions that states have rolled back.

The most widespread about-face in GOP states is a sudden openness to letting local authorities mandate masks — a concession that cities including Phoenix and Little Rock, Arkansas, quickly put into action but is increasingly criticized as insufficient as the outbreaks rage.

In Florida, which has reported over 5,000 new cases in each of the past two days, DeSantis has resisted calls to mandate masks, leaving that decision to local leaders. The Republican contends that areas not as severely affected should not have to bear the same burdens.

Add to that the political optics of reimposing restrictions less than two months before Republicans descend on the state in late August to renominate Trump. The Republican National Committee awarded Jacksonville the convention. Trump got in a tiff with North Carolina’s Democratic governor over social distancing restrictions that threatened to dampen his celebration.

The number of cases in Duval County, which is home to Jacksonville, has shot up along with statewide numbers.

“It’s not political. You’re in a situation where the whole reason the mitigation was done was to flatten the curve so the hospitals weren’t overwhelmed," DeSantis said last weekend. “We didn’t 100 percent know what was going to happen.”

U.S. Rep. Donna Shalala of Florida, a former secretary of Health and Human Services during the Clinton administration, called on DeSantis to make a course correction.

“He followed the president’s leadership, and people have died because of it,” she said. “He can pivot and take very strong steps.”

In Arkansas, Gov. Asa Hutchinson has urged people to cover their faces and even begins his daily briefings by showing off his mask. But the Republican governor has resisted calls to require them, arguing that it would be difficult to enforce in a rural state.

Hutchinson also says he’s concerned such a mandate could spark a backlash, with people refusing to wear masks. Some cities have acted on their own, and he says he won't get in their way.

“How do you encourage people to wear a mask?” Hutchinson said this week. “I think we’re taking it by providing the guidelines.”

In Arizona, Ducey resisted pressure to close restaurants as the virus first spread in March, saying the state wasn’t seeing explosive growth like New York and didn’t need to act so aggressively. The Democratic mayors of Phoenix, Tucson, Flagstaff and elsewhere imposed their own restrictions.

The governor responded with an executive order closing restaurants in counties with known coronavirus infections but also defining some businesses cities couldn’t restrict, such as golf courses.

The numbers “continue to go in the wrong direction,” Ducey said Thursday.