The Flint Hills contain some of the last remaining tallgrass prairie in North America. 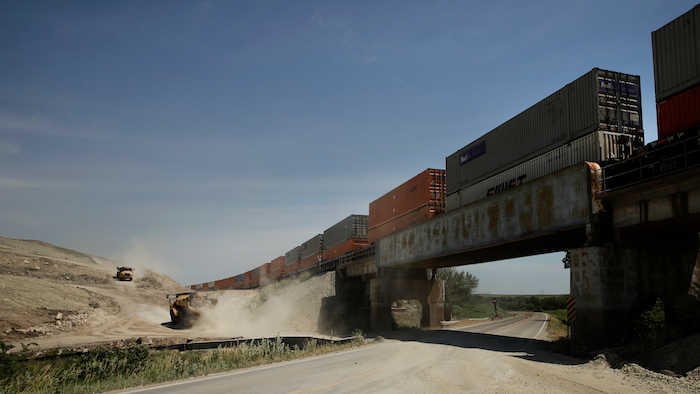 BELLE PLAINE, Kan. (AP) — More than a century after the arrival of the railroads to the Flint Hills of Kansas, a large-scale track expansion is tearing up a scenic stretch in some of the last remaining tallgrass prairie left in the nation.

The multiyear project by BNSF Railway to build a second main line of track in Kansas got little public attention until construction this year on a nearly 42-mile (68-kilometer) stretch of track that the railroad is laying from Ellinor to El Dorado. Located south of the Tallgrass Prairie National Preserve, the new line will run alongside much of Highway 177, a national scenic byway through the Flint Hills.

The work is occurring along the railroad's right-of-way and 19 parcels of land it is acquiring, BNSF spokeswoman Amy Casas said in an email.

When Wichita resident Clayton Jamison and his wife traveled to Cottonwood Falls in late May, he was shocked as they came over a rise in the road a few miles north of Cassoday and saw the size of the excavation.

“It looked like a bomb went off,” Jamison said.

At one time, 150 million acres (60,7029 square kilometers) of tallgrass prairie stretched from Texas to Canada. Today only 4% of that ecosystem survives, with the largest piece in the Flint Hills, according to the Flint Hills Learning Center.

The Flint Hills, once an ancient inland seaway, has very shallow soil and hard limestone rocks that kept settlers from plowing it. Tallgrass prairie grasses grow up to 10 feet (3 meters) tall, with roots that extend up to 15 feet (4.5 meters) deep. Its ecosystem supports threatened species like prairie chickens.

“Up there that is a special place,” Jamison said of the Flint Hills. “It is just one of those things that have been that way for millennium times. It hasn't changed a lot.”

BNSF said its earth moving is only temporary and that it will restore the area and plant native grass as required by its state construction stormwater permit and in “voluntary consultation” with The Nature Conservancy.

“We are also a big supporter of the ongoing efforts to preserve the tall grass prairie of the Flint Hills,” Casas wrote, noting donations the railroad has made to such efforts.

The Nature Conservancy said in an email that its land protection director is scheduled to look at the rail expansion project with BNSF next week.

“It’s always unfortunate to lose more native prairie, especially in the Flint Hills, which is the last uninterrupted expanse of tallgrass prairie in North America,” said Laura Rose Clawson, spokeswoman for The Nature Conservancy. “We understand the necessity of BNSF’s expansion project, but we hope they take steps to mitigate this loss of prairie.”

No environmental impact statement or public notice was required because the work is allowed under an existing nationwide permit, said Mark Frazier, regulatory branch chief for the Corps of Engineers’ Kansas City district.

The Corps, which has jurisdiction over U.S. waters, considered the impacts of each of the project's 42 water crossings separately, Frazier said.

But even if federal regulators had considered the Flint Hills rail expansion as a single project, Frazier does not believe an environmental impact statement would have been required.

“When you consider them as separate projects the way we did for these permits, most of the impacts were temporary to allow for construction. Then they will be restored once they are done working,” said Sarah Reznicek, the Corps’ regulatory project manager who handled its review.

The expansion is being done to help with the transportation of consumer goods. BNSF said the project supports its customers' growth. It noted that the railroad has invested about $815 million in Kansas during the last five years to maintain the railroad and expand it where needed.

Officials in the area say most of the complaints they have heard are from visitors, not locals.