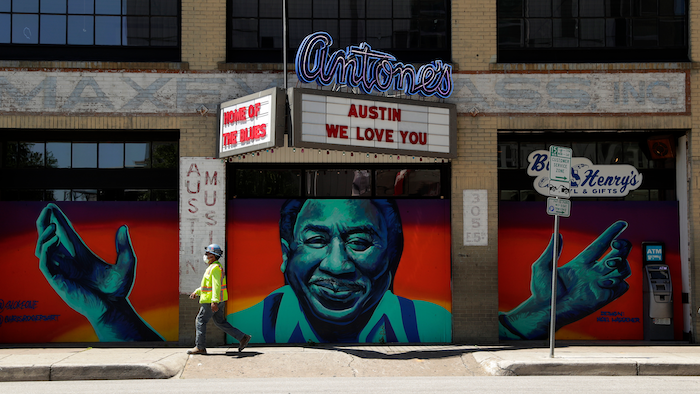 A worker passes a closed nightclub in Austin, Texas, May 18, 2020.
AP Photo/Eric Gay

WASHINGTON (AP) — The number of Americans thrown out of work since the coronavirus crisis struck two months ago has climbed to nearly 39 million, the government said Thursday.

More than 2.4 million people applied for unemployment benefits last week in the latest wave of layoffs from the outbreak that has triggered nationwide business shutdowns and brought the economy to its knees, the Labor Department reported. That brings the running total to a staggering 38.6 million.

An additional 2.2 million sought aid under a new federal program for self-employed, contractor and gig workers, who are now eligible for unemployment benefits for the first time. Those figures aren’t adjusted for seasonal variations, so they are not included in the overall number of applications.

Federal Reserve Chairman Jerome Powell said the unemployment rate could peak in May or June at 20% to 25% — a level unseen since the depths of the Great Depression in the 1930s.

As of April, unemployment stood at 14.7%, a figure also unmatched since the era when President Franklin D. Roosevelt was assuring Americans that the only thing to fear was fear itself.

The breathtaking downturn — unprecedented in its speed — has turned up the pressure on politicians to lift the lockdowns that are destroying businesses and livelihoods.

The nonpartisan Congressional Budget Office estimated the economy is shrinking at a 38% annual rate in the April-June period, by far the worst quarterly contraction on record.

About 5 million people worldwide have been confirmed infected, and over 328,000 deaths have been recorded. That includes more than 93,000 in the U.S. and around 165,000 in Europe, according to a tally kept by Johns Hopkins University and based on government data. Experts believe the true toll is significantly higher

Meanwhile, doubts grew over ambitious plans by European governments to use contact-tracing smartphone apps to fight the spread of the virus as they ease their lockdowns and restart their economies.

British Security Minister James Brokenshire told the BBC that an app that was supposed to be introduced by mid-May is not ready, and he suggested “technical issues” were to blame.

Similarly, France delayed last week's sdplanned roll-out of its app, saying it won't be ready before next month because of technical problems and privacy concerns.

Experts say that being able to quickly identify people exposed to the virus can help stop the spread of the scourge.

Italian Premier Giuseppe Conte said Thursday that the country's app will begin testing in the coming days, and Spain plans to try out its technology at the end of June in the Canary Islands.

Meanwhile, drug maker AstraZeneca said it has secured agreements to produce 400 million doses of a still experimental and unproven COVID-19 vaccine that is being tested at the University of Oxford, one of the most advanced projects in the search for a vaccine.

While no vaccine has yet been proven to work against the virus, the pharmaceutical industry is already working to ramp production so that massive doses will be available quickly.

The Anglo-Swedish company reported it has received more than $1 billion from the U.S. Biomedical Advanced Research and Development Authority for the development, production and delivery of the vaccine, starting this fall.

AstraZeneca CEO Pascal Soriot said the company “will do everything in our power to make this vaccine quickly and widely available.’’

Around the world, the effort to get back to business is raising worries over the risk of new infections, from hard-hit Milan, Italy, to meatpacking plants in Colorado and garment factories in Bangladesh.

In China, the communist leadership took extensive precautions to prevent infections as it prepared for the opening of its National People’s Congress on Friday and a parallel meeting of advisers on Thursday. The meetings in Beijing were delayed for two months because of the outbreak.

An outbreak at the congress would be a potential public relations nightmare as President Xi Jinping showcases Beijing’s apparent success in curbing the virus that emerged in the Wuhan late last year.