The head of its top science panel resigned amid claims of red tape and institutional gridlock. 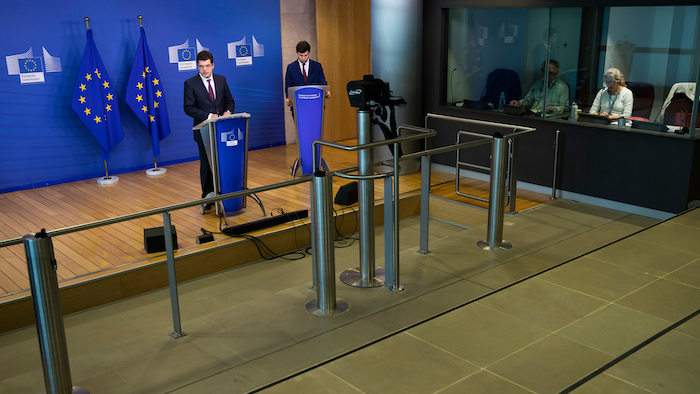 BRUSSELS (AP) — The European Union has been thrown into a scientific policy dispute at the height of the coronavirus crisis after the head of its top science panel resigned amid claims of red tape and institutional gridlock while other scientists at the group indicated that they were well rid of him.

Professor Mauro Ferrari resigned Tuesday as president of the European Research Council and insisted in a statement dramatically titled “Return to the frontlines, to the frontier" that he had “lost faith in the system" of the EU, complaining it was stifling his ambition for swift action on the pandemic.

On Wednesday though, the 19-member scientific council of the ERC said they had unanimously called on Ferrari to resign last month. The Council added in a statement that he “displayed a complete lack of appreciation" and “did not understand the context of" the scientific group. The Council claimed Ferrari failed to sufficiently consult its scientists and too often sought to promote his own ideas instead of those of ERC.

Ferrari had been named for the job in May last year but only started his term on Jan. 1. His resignation had immediate effect.

The EU's executive Commission, which runs the day-to-day business of the 27-nation bloc, “regrets the resignation of Professor Ferrari at this early stage in his mandate (...) and at these times of unprecedented crisis in which the role of EU research is key,” spokesman Johannes Bahrke said.

The ERC promotes top research in the EU and boosts what it calls “investigator-driven frontier research across all fields, on the basis of scientific excellence." It was set up in 2007 and runs on a 2 -billion-euro ($2.2-billion) annual budget.

The resignation was first announced by the Financial Times, based on a statement released to the paper by Ferrari, who said he had “been extremely disappointed by the European response” to the pandemic.

Ferrari complained about running into institutional and political obstacles as he sought to swiftly set up a scientific program to combat the virus.

“I have seen enough of both the governance of science, and the political operations at the European Union,” he wrote in the statement. “I have lost faith in the system itself.”

The ERC council’s vice president will assume the president’s duties on an interim basis until the EU’s chooses Ferrari’s successor, Bahrke said.

Ferrari said that he would now return “to the frontlines of the fight against Covid-19, with real resources and responsibilities, away from offices in Brussels, where my political skills are clearly inadequate,"

As the coronavirus spread to Italy, Spain and other European nations, the EU was criticized for not acting forcefully enough to set up a coordinated response, although health policy is primarily a responsibility of national governments.

Bahrke defended the EU’s actions during the pandemic, saying the bloc has put forward “the most comprehensive package of measures combating the coronavirus.”

He added that the ERC has been working on 50 different projects related to the new virus first identified in China late last year.