The White House offered few specifics on the size of the break or its duration. 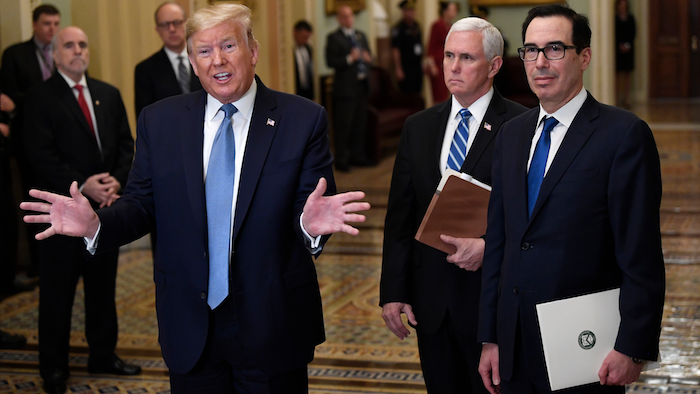 WASHINGTON (AP) — President Donald Trump's proposed payroll tax break met with bipartisan resistance on Capitol Hill as pressure mounts on the administration and Congress to work more vigorously to contain the coronavirus outbreak and respond to the financial fallout.

The president's GOP allies have been cool to additional spending at this stage, especially for cutting taxes that would have to be reimposed later — presumably after the November election. Democrats prefer their own package of low- or no-cost virus testing, unemployment insurance and sick pay for workers struggling to keep paychecks coming as the outbreak disrupts workplaces.

“We're taking this unbelievably seriously," Trump said after his meeting at the Capitol. “It will go away, just stay calm.”

Asked why he has not yet been tested for the virus, after having been in close contact with several advisers and members of Congress who are now self-quarantined after exposure, Trump said: “I don't think it's a big deal” and "I feel very good.”

White House officials have been blindsided by the president's sudden moves. As Trump headed to Capitol Hill, two administration officials said the proposals he was putting in play had not been completed. They were unauthorized to discuss the planning and requested anonymity.

Trump's team offered few specifics at the closed door GOP lunch on the size of the payroll tax break or its duration, senators said. Trump has long promised to bring about an election year "tax cuts 2.0," and seemed to be seizing on the virus fears as a way to bring about a victory on that front before November. Behind closed doors he discussed the coming elections in swing states like Arizona and Montana where GOP senators face tough races.

In addition to payroll tax relief, Trump has said he wants help for hourly-wage workers to ensure they’re “not going to miss a paycheck” and “don’t get penalized for something that’s not their fault." He's also mentioned small-business loans. But details are slight.

So far, the president's approach, based on tax breaks, is receiving a cool response. Some Republicans endorsed Trump's suggestion that help be provided to the beleaguered cruise-ship and airline industries, while others spoke up for other industries, including energy and gas. Some pushed for broader economic stimulus from a bipartisan highway bill they said was shovel-ready and popular. The payroll tax plan remains a work in progress.

“They didn't get into specifics,” said the No. 2 Republican, Sen. John Thune of South Dakota.

Increasingly, it appears a solution will originate in the House, where Speaker Nancy Pelosi told House Democrats they would keep working this week despite concerns about the risk of infection at the Capitol.

"We are the captains of the ship,” Pelosi said during a closed-door meeting, according to a person in the room unauthorized to discuss the private caucus and granted anonymity. “We are the last to leave.” But time is short as Congress heads toward its scheduled break next week.

Trump tapped Treasury Secretary Steven Mnuchin to meet with Pelosi, whose support will be needed for any deal in the divided Congress, where Republicans hold the Senate majority but Democrats hold the House.

Munchin declared the meeting with Pelosi “productive” and said they'd "work together on a bipartisan basis to figure out how we can get things done quickly.”

Pelosi insisted the “threshold” for any proposal must be its ability to respond to the virus. Her team was preparing to come out with a package in the next day or so.

Senate Majority Leader Mitch McConnell was noncommittal after the meeting with Trump, emphasizing the path forward rests in the talks between Mnuchin and Pelosi. "We’re hoping that he and the speaker can pull this together," he said.

That reflected divisions even within the administration on the best approach. The payroll-tax plan found support from Trump's son-in-law and adviser Jared Kushner and trade adviser Peter Navarro, among others. Other aides, including Mnuchin and Larry Kudlow advocated more modest measures. Trump prefers the payroll tax holiday “last through the end of the year,” Kudlow said.

The vast majority of people recover from the new virus. According to the World Health Organization, people with mild illness recover in about two weeks, while those with more severe illness may take three to six weeks to recover. In mainland China, where the virus first exploded, more than 80,000 people have been diagnosed and more than 58,000 have so far recovered.

In Washington, there were mixed signals about the public mood. Tourists still arrived for visits while marquee events, including this weekend's Gridiron Club dinner, an annual mingling of political Washington, was postponed.

At the U.S. Capitol, some senators said they resisted shaking Trump's hand when he arrived for lunch. Lawmakers were given new instructions on how to protect themselves, with the House's attending physician asking them to stop shaking hands or touching people during greetings. He recommended the split-fingers Star Trek greeting instead.

Crowds are the norm in the Capitol and handshakes are coin of the realm there, even between political foes. But about a half dozen lawmakers — including Trump confidantes — have placed themselves in quarantine after being exposed to someone who had the virus, and the norm has been upended.

One, GOP Rep. Matt Gaetz, who self-quarantined after having traveled with the president from Florida on Air Force One on Monday, said he had tested negative for the disease. He said he would remain quarantined as a precaution. Another, Trump's incoming chief of staff. Rep. Mark Meadows, R-N.C, remains on quarantine.

During House Democrats' closed session, one lawmaker, California Rep. Raul Ruiz, who is a doctor, raised concerns about the situation, noting that the average age in Congress is 57. Some lawmakers have underlying health conditions and their work requires them to fly back and forth between home and the capital.

But House and Senate leaders have made it clear there will be no voting by proxy. Quarantined lawmakers will be missing votes. Lawmakers were told up to 10,000 staff members could telework, if need be.

The Securities and Exchange Commission, which monitors financial markets, encouraged employees at its Washington headquarters to work from home after an employee there had respiratory symptoms and was referred for coronavirus testing.

And Defense Secretary Mark Esper postponed a trip to India, Pakistan and Uzbekistan that was to begin Monday, citing the coronavirus crisis, Pentagon press secretary Alyssa Farah said Tuesday. She said he would remain in the U.S to help manage the Pentagon response.