Its detached engine slammed into a work train car on an adjacent track. 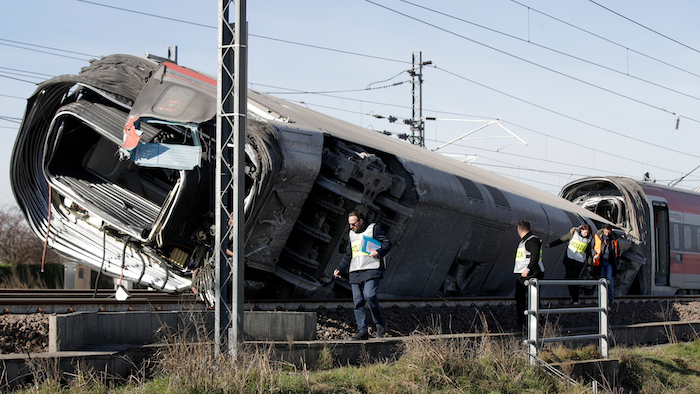 Police inspect an overturned carriage of a high-speed train after it derailed near the town of Lodi, Italy, Feb. 6, 2020.
AP Photo/Luca Bruno

OSPEDALETTO LODIGIANO, Italy (AP) — A high-speed passenger train derailed in northern Italy before dawn Thursday and its detached engine slammed into a work train car on an adjacent track, ripped away part of a building wall and flipped around. Two train workers were killed and 28 people were injured, authorities said.

Girolamo Fabiano, a railroad police official, said work had been done during the night on the stretch of track where the derailment happened. He said it was unclear if that was a factor in the train going off the tracks. Prosecutors and railroad experts are investigating.

Italian news channel Sky TG24 said the work occurred on a track switch area not far from the derailment site.

“The engine car kept going, 100 meters, at high speed,” Cardona told reporters at the crash site, near the town of Ospedaletto Lodigiano.

Besides striking the isolated work car, the out-of-control engine car clipped an unoccupied railways building in its runaway path, ripping away part of an exterior wall of a railways maintenance building, AP photos indicated. The engine car ended its fatal trajectory, flipped around 180 degrees.

Authorities said the crash occurred about 20 minutes after the train had left Milan heading south toward Bologna.

“The engine car car derailed, detached completely and kept going,'' Girolamo Fabiano, a railroad police official told state radio. ”Then the second car derailed , " ending up almost on its side.

Cardona said it was fortunate that, due to the early hour, the train wasn't crowded. Police said it had about 30 passengers. Only one passenger was in the first car, a business-class car, that ended up on its side, an a couple of passengers each were in the next few cars. The train passenger cars further back remained upright.

Authorities said it was possible the engine car automatically decoupled from the cars behind it as part of a safety mechanism to prevent the rest of the train from following the engine car in case of derailments.

One passenger, an unidentified man interviewed by state TV, likened the moment of the crash to being on a roller-coaster for 20 seconds.

Rescuers had to help some passengers out of the train.

The passenger train run is part of a popular high-speed rail service known as Freccia Rossa, or the Red Arrow service, which links Italy's north and south and is used by business people and tourists as well as locals.

Rail traffic was diverted to local tracks, with delays of about an hour reported.

Italian President Sergio Mattarella in a condolence message lamented the deaths. He urged a swift investigation to determine the derailment's cause “to guarantee the right of citizens to safety on transport.”

In other recent derailments near Milan, three people were killed and more than 100 injured when a regional train derailed on another line in January 2018.