The items were taken from the famed codebreaker's former boarding school in 1984. 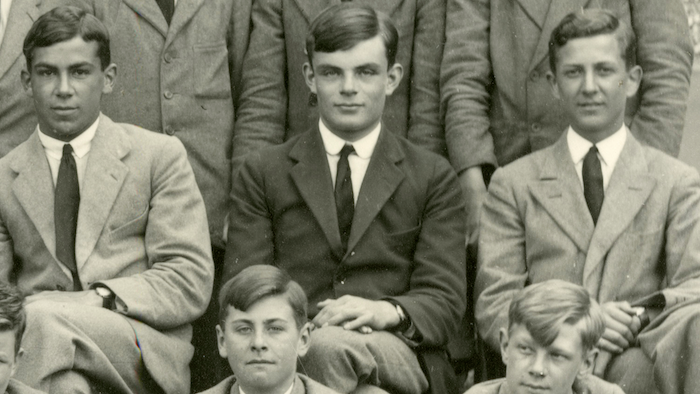 DENVER (AP) — A U.S. woman who said she was visiting England to do a study of the late World War II codebreaker and computing pioneer Alan Turing walked into the prestigious boys’ boarding school he attended and asked to see a collection of his memorabilia.

She was given a wooden box with items that once belonged to Turing, who helped crack Nazi Germany's secret codes and whose story inspired 2014's Oscar-winning film “The Imitation Game.” Inside the box was his Ph.D. from Princeton University, his Order of the British Empire medal and other mementos.

When she left that day in 1984, the box was empty. The only thing left inside was a note asking for forgiveness and promising to return the items someday, according to a recent court filing by government lawyers.

More than 30 years later, the U.S. Department of Homeland Security in Denver has the items that were seized from the Colorado home of the woman, who later changed her name to Julia Turing.

The Princeton degree was found behind a dresser in 2018. The medal, given for contributions to a field, and a letter from King George VI awarding the honor to Alan Turing was found in a briefcase behind a wall in a bathroom.

Her offer to donate the items to the University of Colorado had launched a lengthy international investigation to sort out the rightful owner of the items, according to a forfeiture action filed Jan. 17 and first reported by BizWest. The action is the first of two legal steps to return the memorabilia to the Sherborne School in England.

Julia Turing had letters from Sherborne’s treasurer, Col. A.W. Gallon, thanking her for previously returning most of the memorabilia and saying she could keep the diploma, according to court documents. They suggested she could show the correspondence to police if she was questioned.

But school officials told investigators that giving away any school property would require the permission of its board of governors, which did not consider the matter, according to Sherborne documents.

The school said some items that Julia Turing previously returned were not the original items that were taken. It noted that the Order of the British Empire medal she sent back was tarnished and did not include its miniature version and the king's letter.

According to court documents, Julia Turing told investigators that she had bought OBE medals online, and several were found during the search of her home, along with the original discovered behind the bathroom wall.

In diaries and letters seized by investigators, she wrote of her “tremendous love and devotion” to Alan Turing and how she wished she did not have to hide his things. In one diary entry, addressed to Alan Turing, she worried about a museum forcing her to give up the items by claiming they are stolen, court documents show.

The U.S. government is asking a judge to give it permanent custody of the items so it can begin another legal process to return them to the school.

Julia Turing has until March to file an objection to the forfeiture. Her attorney, Katryna Spearman, did not return messages seeking comment. She has not been charged with a crime.

Sherborne School headmaster Dominic Luckett declined to comment Friday on the items removed from the school's archives because authorities are still dealing with the matter.

Sherborne officials are proud of their distinguished alumnus and seek to preserve and promote his legacy, Luckett said in a statement to The Associated Press.

“As part of that, we take very seriously our responsibility to look after those items in our archives which relate to his time at Sherborne School and his subsequent life and work,” he added.

During World War II, Alan Turing helped crack Nazi secret codes by creating the “Turing bombe," a forerunner of modern computers. After the war, he was prosecuted for homosexuality, then illegal in England, and forcibly treated with female hormones. He died in 1954 at age 41 after eating an apple laced with cyanide in what was ruled a suicide.

He received a posthumous apology from the British government in 2009 and a royal pardon in 2013.