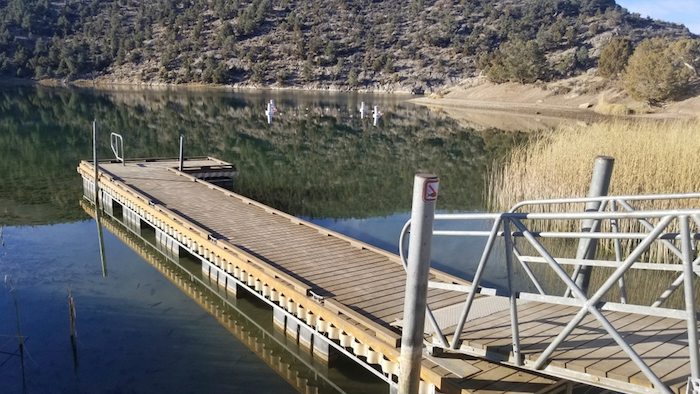 RENO, Nev. (AP) — State officials have completed the first phase of a rehabilitation project at a nearly 90-year-old dam in eastern Nevada where they had found “unstable and potentially dangerous” conditions.

The Nevada Department of Wildlife closed the reservoir temporarily at Cave Lake State Park in October to drain down the water level and better assess safety concerns at its 83-foot-tall (25-meter-tall) dam.

State engineers say they completed initial repairs earlier this month after identifying sources of concerns about the aging structure's ability to handle a big storm event. They also discovered a small whirlpool that creates a vortex under current flows that could be unsafe to swimmers and boaters.

An Associated Press investigation published last year identified the Cave Creek Dam as one of at least 1,680 dams nationwide in poor or unsatisfactory condition and rated as high-hazard because of the potential for loss of life if they failed. State officials began work on the dam built in 1932 before the AP published its findings in November.

The White Pine County lake at the popular fishing and boating destination about 30 miles (48 kilometers) from the Utah line was reopened earlier this month for ice fishermen and others after officials installed a safety barricade around the whirlpool and a temporary entry point to the water.

Crews installed a new gravel path next to the closed boat ramp to provide the only safe entry point due to the instability of the new shoreline, which currently is deep mud beneath snow.

Because the water level has been drawn down 7 feet (2.1 meters) and may be dropped another 6 feet (1.8 meters) this spring, the dock will remain closed throughout the restoration project expected to be completed within five years.

The long-term rehabilitation project will include enhancing overall stability of the dam with an expanded spillway and increased storm-water storage capacity, it said.

Chief engineer Rodd Lighthouse said in a statement emailed to AP Thursday the department is "actively seeking and pursuing solutions to ensure that visitors can safely use the lake while dam rehabilitation efforts are ongoing.”

“We appreciate (the public's) understanding as we complete these critical safety projects," he said.

Unlike most states, Nevada refuses to make public the emergency action plans dam operators are required to prepare outlining potential flood zones and damage that could result from a catastrophic failure. Fourteen Nevada dams were in the high-hazard category, but most are smaller diversions and irrigation projects.

In response to a public records request from AP last year, the state cited concerns that release of Cave Creek Dam's emergency plan could subject it to terrorist threats. But it did release inspection reports showing Cave Creek Dam went nine years without updating its emergency action plan until Jan. 24, 2018.

A state inspection in June 2018 rated its condition “poor,” noting the spillway may be undersized and that the “spillway capacity may need to be increased to safely pass large storm events.”

It also noted the dam lacks a low-level outlet necessary to draw down water in an emergency, recommended installation of a seepage collection system to monitor water flows from seepage areas and warning or danger signs to promote public safety.

Division of State Parks spokeswoman Jenny Ramella said the whirlpool vortex is currently below the surface of the ice. Once the ice melts, floating buoys on lines will circle it with “no swimming” signs attached.

Department of Wildlife spokeswoman Ashley Sanchez said the department has been actively pursuing improvements since the Nevada Division of Water Resources recommended corrective action in an inspection in August 2010.

A consulting engineer estimated in 2016 the long-term rehab project would cost about $3.4 million, Sanchez said, but final design plans won't be decided before the end of next year.

So far, the department has spent more than $900,000 to analyze and monitor the dam, design mitigation alternatives and continue work on a feasibility study to assess the alternatives expected to be complete by December 2021.