Sailors saw water rushing at them as they scrambled for the exits and, in some cases, had to swim for their lives. 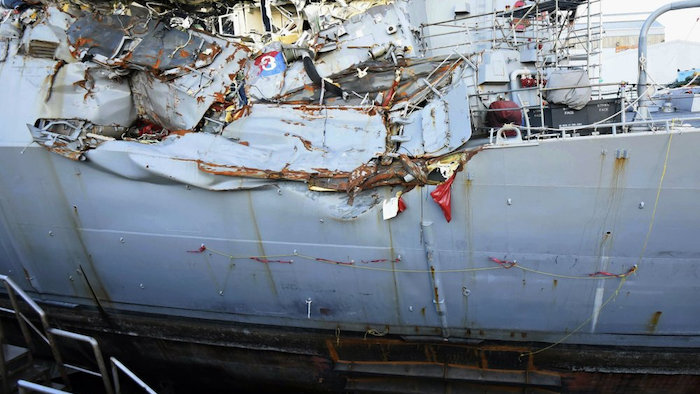 This July 11, 2017, file photo provided by the U.S. Navy shows the USS Fitzgerald in dry dock in Yokosuka, Japan, for repairs and assessment of damage sustained from a June 17 collision with a cargo ship in the waters off of Japan. Survivors and descendants of those killed when a container ship collided with the U.S. Navy destroyer off Japan's coast are suing the ship's Japanese charterer, according to a lawsuit filed Monday, Nov. 18, 2019, that details the survivors' scramble for safety as water rushed in.
Spc. 1st Class Leonard Adams/U.S. Navy via AP

NEW ORLEANS (AP) — A lawsuit filed Monday details a desperate scramble for safety as water rushed in when a container ship collided with a U.S. Navy destroyer off Japan’s coast two years ago, killing seven sailors.

The lawsuit filed against Tokyo-based NYK Line by survivors of the collision and relatives of those killed lays out how sailors saw water rushing at them as they scrambled for the exits and, in some cases, had to swim for their lives. Seven U.S. sailors were killed in the collision June 17, 2017, as the two ships were trying to merge into heavy traffic. An underwater gash sent water flooding into two sleeping compartments at a time when most of the nearly 300 sailors on board would have been asleep.

Sailor Jackson Schrimsher was one of the last to make it out of the sleeping quarters alive, according to the lawsuit. He recalled a “wall of water” coming at him as he tried to reach the door — "scuttle” in Navy parlance.

“He remembers a locker falling over onto him and a Sailor pushing him out from under it. By the time he reached the port-side scuttle, he was completely submerged. Plaintiff Schrimsher stuck his hand up out of the water through the scuttle, and was pulled to safety,” the lawsuit said.

The lawsuits allege personnel aboard the ACX Crystal failed to follow procedures intended to warn their own crew and nearby ships of impending danger. For example, the lawsuit says it wasn’t until one minute before the collision that ACX Crystal operators took the ship off autopilot and tried to evade a collision. The ACX Crystal also failed to sound any short blasts to alert the USS Fitzgerald of its position, the lawsuit alleges.

In a statement, plaintiffs’ lawyer rDavid Schloss said that the collision was “entirely avoidable.”

“The negligent and reckless conduct of the Crystal's crew led to the horrific drowning deaths of seven young Navy sailors. These brave young men leave behind children, parents, spouses, and siblings who continue to try to make sense of the senseless,” Schloss said.

NYK Line said in a statement Monday: “Our thoughts and deep concerns go out to all those directly affected. NYK Line has cooperated fully with the investigation into the June 2017 incident, but as a company we never comment on legal matters that are impending or before the courts.”

The two lawsuits were filed Monday in federal court in Louisiana on behalf of relatives of the seven dead sailors and 40 sailors who survived as well as some family members of the survivors. The lawsuit is asking in excess of $287 million. The lawsuit says NYK Line had “principal responsibility for the navigation and/or operation of the ACX Crystal.”

The lawsuit laid out the fear and panic likely experienced by the seven sailors who died as water flooded into the sleeping compartment.

The collision was one of two deadly accidents involving American Navy personnel that summer. On Aug. 21, the USS John S. McCain — a Navy destroyer — collided with a tanker near Singapore. Ten sailors aboard the McCain died.

The Navy conducted a series of investigations and reviews into the two collisions, concluding that the accidents were the result of poor judgment, bad decision-making and widespread training and leadership failures by the commanders and crew who didn't quickly recognize and respond to unfolding emergencies.

The Navy concluded that the two crashes, as well as a third collision in May and a ship grounding, were all avoidable, and resulted from widespread failures by the crews and commanders who didn't quickly recognize and respond to unfolding emergencies.

A report recommended about 60 changes to address the problems — from improved training on seamanship, navigation and the use of ship equipment to more basic changes to improve sleep and stress management for sailors.