WeWork makes money by leasing buildings and dividing them into smaller spaces. 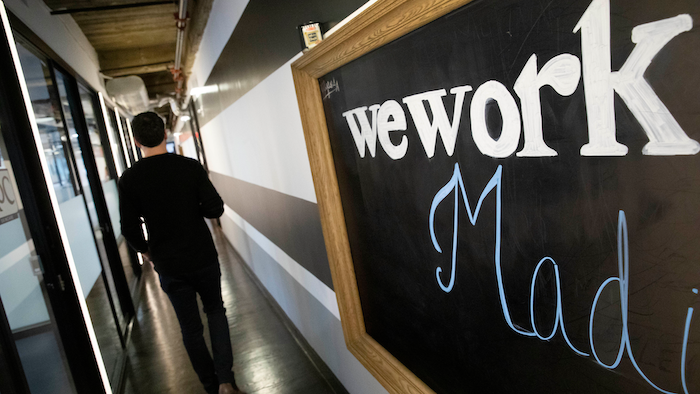 This Nov. 5, 2019 file photo shows a WeWork office space in New York. WeWork says it racked up $1.25 billion in losses in the third quarter as it geared up for an ultimately scuttled stock market debut WeWork’s losses more than doubled between June-September, compared to the same period the previous year, as the office-sharing company spent heavily in pursuit of aggressive growth.
AP Photo/Mark Lennihan

NEW YORK (AP) — WeWork racked up $1.25 billion in losses in the third quarter as it geared up for, and ultimately scuttled, its debut as a public company.

WeWork’s losses more than doubled between June-September, compared with the same period the previous year, as the office-sharing company spent heavily in pursuit of aggressive growth.

The losses outpaced an eye-popping 94% spike in revenue, which reached $934 million in the same period compared with last year.

The figures were included in a report to debtholders, obtained Thursday by The Associated Press.

WeWork added 103 office-sharing locations during the third quarter. It now has 625 locations in 127 cities around the world. WeWork makes money by leasing buildings and dividing them into smaller spaces, which it then leases to members on a flexible, short-term basis.

Membership grew to 609,000. About 43% of members were companies with 500 or more employees, which tend to enter into longer-term leases. WeWork intends to focus on building up that clientele because it provides more stable recurring revenue than the smaller companies, startups and freelancers that currently make up the majority of its members.

Spending on cash leases grew to $448 million in the quarter, from $218 million the previous year.

WeWork canceled its initial public offering as investor skepticism about the company’s worth grew.

That left it temporarily scrambling for cash because it had been counting on the IPO to raise $9 billion in stock and related debt financing.

Softbank, already WeWork’s biggest investor, stepped in with $9.5 billion in equity and debt financing that handed the Japanese tech conglomerate ownership of nearly 80% of the company.

WeWork is now embarking on a major restructuring that will include job cuts. It is also selling off most of the side businesses it acquired in a spending spree, including the online community event organizer Meetup.

The changes are part of a plan to refocus on WeWork’s core business of flexible office leasing and away from the scattered vision pursued by ousted CEO Adam Neumann, which included opening an elementary school and investing in a wave pool company.