The speedboat had apparently traveled non-stop for about 20 hours. 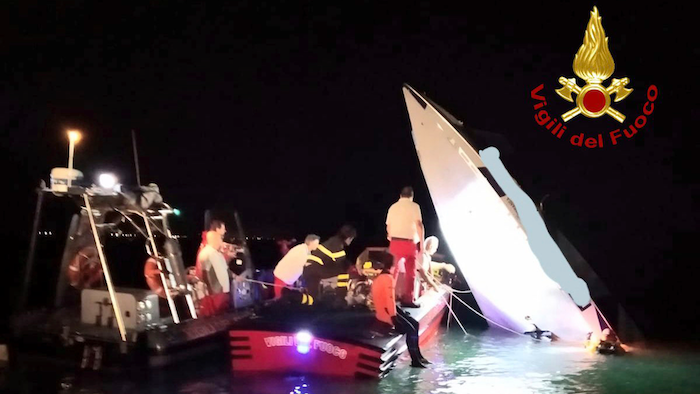 This image provided by firefighters shows the wreckage of a racing boat that allegedly smashed into a dam at the entrance of the Venice laguna, Italy, late Tuesday, Sept. 17, 2019. Firefighters said one of the men on board was thrown off the boat and was taken to the hospital, the bodies of the three others were found by scuba-divers inside the cabin. According to the Italian news agency ANSA, the men were attempting to break the racing boat record for Monte Carlo to Venice and among the dead was 76-year-old Italian boat racing pilot Fabio Buzzi.
Italian Firefighters via AP

ROME (AP) — Three sportsmen trying to set a new speedboat record were killed when their vessel crashed into a breakwater offshore the lagoon city of Venice and flipped over, firefighters said Wednesday.

A fourth person, the sole survivor of the Tuesday crash, was badly injured, according to firefighters involved in the rescue and retrieval of bodies.

Italian speedboat race officials said the boat was being used in an attempt to set a speed record for the route from Monte Carlo, a Mediterranean port in Monaco, to Venice.

They said the boat began the undertaking Monday morning and rules for setting a record allowed one fuel stop.

Italian state radio said the speedboat was capable of speeds up to 130 kilometers per hour (80 mph).

Earlier Wednesday, authorities said that an Italian and two Britons died in the crash. But later, the Italian coast guard said two of the people who died were Italian and the third was a foreigner. Italian news reports said the other victim was possibly Dutch, and not British.

None of the dead were publicly named pending notification of next-of-kin.

The hospitalized survivor is Italian.

The coast guard was investigating the crash. Authorities said possible factors include the boat's speed and the crew's exhaustion; the speedboat had apparently traveled non-stop for about 20 hours.