The El Paso gunman told police that the AK-style rifle he used came from Romania, and his ammunition was from Russia. 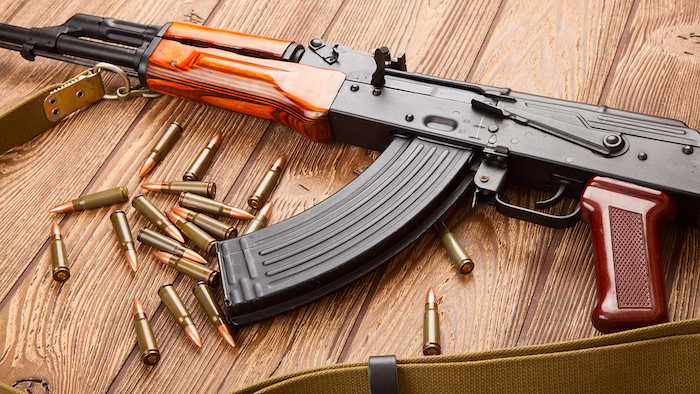 The gunman accused of killing 22 people in El Paso, Texas, told police that the AK-style rifle used in the attack came from Romania and that he ordered his ammunition online from Russia. The claims raised a series of questions about how the suspect acquired his weapons and what the laws are that govern firearms from overseas manufacturers.

How many firearms are imported each year into the United States?

In 2017, nearly five million firearms were imported into the United States, according to the most recent report available on the issue from the federal Bureau of Alcohol, Tobacco, Firearms and Explosives.

Of those, 3.2 million were handguns, 572,309 were rifles and 632,105 were shotguns. Most of those firearms originated in Austria, while Russia and Romania were near the bottom. Romania exported 16,316 firearms to the U.S. that year, the bulk of them handguns.

Russia exported 15,857 to the U.S., with most of them being rifles and shotguns.

Can individuals buy firearms from overseas?

No. Most foreign-based firearms companies have either manufacturing plants in the United States or their products are purchased in bulk by importers in the United States. Those importers are then required to ensure that each firearm is in compliance with American laws before they can sell them to a federally licensed dealer for retail.

For example, some foreign-made long guns will need to have a different stock put on or to have the flash suppressor replaced to ensure that they meet American requirements, said Alan Rice, a spokesman for Gun Owners of America. "They just don't get shipped to the States," he said. "They have to go through a lot of rules, then can go from an importer to a dealer. It's very rare that only one firearm will be imported."

David Chipman, a retired ATF agent who is now an adviser with Giffords, the gun-control advocacy group, agreed that it was unlikely the El Paso gunman purchased his firearm directly from Romania. He likened it to buying a car from a foreign-based manufacturer such as BMW or Volkswagen. "You can go into a gun store and you can buy one — just like a car dealership — a gun that's not manufactured in the United States," he said.

What's the allure of foreign-made firearms?

It mainly comes down to money, as they tend to be cheaper than American-made firearms. For example, a Romanian WASR-10 sells for around $700, whereas some American made AR-15-style guns can run well over $1,000. "America's gun market has been heavily influenced for the past several decades by these cheap weapons of war that became popular because they're so much less expensive," Chipman said.

Can an individual buy ammunition online?

There are no restrictions on the amount of ammunition that can be purchased in each transaction.

The person does have to attest that he or she is not prohibited from possessing the ammunition but, just like purchasing ammunition in a store, it is not subject to a background check.