It's time to rethink humanity’s relationship with the soil. 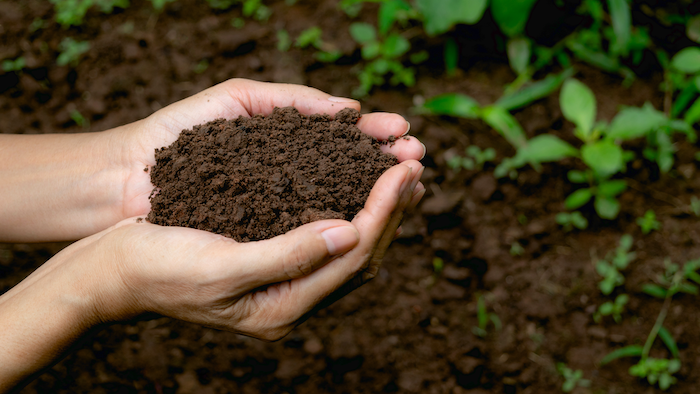 It’s time to take soil seriously. As the Intergovernmental Panel on Climate Change states with very high confidence in its latest report, land degradation represents “one of the biggest and most urgent challenges” that humanity faces.

The report assesses potential impacts of climate change on food production and concludes that rising atmospheric carbon dioxide levels will reduce crop yields and degrade the nutritional quality of food.

To avert climate catastrophe, the report warns, people need to make changes in agriculture and land use. In other words, it’s no longer enough to wean society off of fossil fuels. Stabilizing the climate will also require removing carbon from the sky. Rethinking humanity’s relationship to the soil can help on both scores.

Healthy, fertile soils are rich in organic matter built of carbon that living plants pulled out of the atmosphere through photosynthesis. Carbon-rich organic matter helps fuel the soil organisms that recycle and release mineral elements that plants take back up as nutrients.

But soils release carbon too. And the frequent tillage and heavy fertilizer use that underpin modern conventional agriculture have accelerated degradation of soil organic matter, sending more carbon skyward – a lot, it turns out.

The new IPCC report concludes that globally, cropland soils have lost 20-60% of their original organic carbon content. North American farmland has lost about half of its natural endowment of soil carbon. On top of those losses, modern agriculture consumes a lot of fossil fuels to pull plows and manufacture the synthetic nitrogen fertilizers that farmers rely on to coax large harvests from degraded soils.

Land management choices also affect the amount of carbon stored in trees, plants and soil. The new IPCC report estimates that serious changes in forestry and agriculture to curtail deforestation and improve soil management could reduce global emissions by 5% to 20%. While this won’t solve the climate problem, it would represent a significant down payment on a global solution. 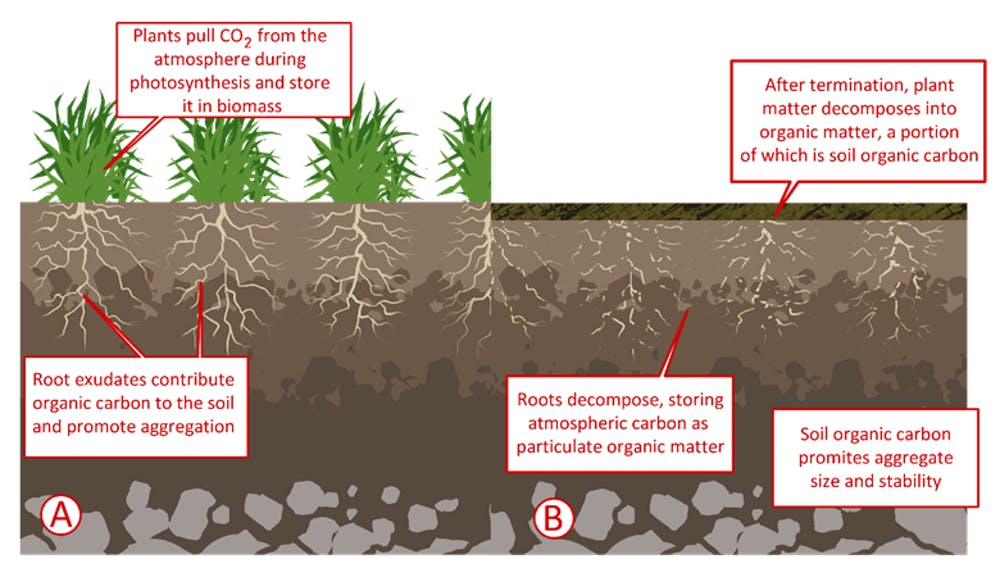 How plants sequester carbon A) as they grow and B) after they die.University of Nebraska-Lincoln, CC BY-ND

Investing in soil regeneration would also deliver other benefits. One key takeaway from the IPCC report is that conventionally tilled soils erode more than 100 times faster than they form. This troubling conclusion echoes and amplifies what I found a decade ago, after compiling global data on rates of soil formation and loss. My book “Dirt: The Erosion of Civilizations” tells how soil degradation undermined societies around the world, from the ancient Greeks and Romans to the U.S. Dust Bowl of the 1930s.

Today humans have degraded roughly one-third of the world’s topsoil, and about about 3.2 billion people – more than a third of humanity – already suffer from the effects of degraded land. Continuing down this path does not bode well for feeding a growing world population.

But what if it was possible to reverse course, regenerate soil organic matter and reduce farmers’ need for diesel fuel and chemical fertilizers made with fossil fuels? This would make it feasible to stash more carbon in the soil and reduce the amount that’s sent skyward in the process of growing food.

I saw the potential for regenerative agriculture to restore soil organic matter in both developed and developing countries when I researched “Growing a Revolution: Bringing Our Soil Back to Life,” my book about how regenerative farming practices allow farmers to reduce their use of costly fertilizers and pesticides.

All of the farmers I interviewed shared three things in common. They had switched from plowing to no-tillmethods that minimized soil disturbance, planted cover crops, and grew a diverse mix of cash and cover crops. Some had even adopted regenerative grazing practices that put livestock to work rebuilding carbon-rich soil. Their results showed me that when farming and ranching practices build soil health, they can reverse soil degradation rapidly and profitably.

Barriers to adopting regenerative farming systems include force of habit, lack of knowledge about new practices and real and perceived economic risk during the transition. But the benefits of rebuilding healthy, fertile soil are clear.

According to a 2018 U.N. report that reviewed global land degradation, the economic benefits of land restoration average 10 times the costs. Rebuilding fertile soil is also one of the most promising ways to address hunger and malnutrition in Africa, where the costs of failing to combat land degradation are typically three times the cost of addressing the problem.

Restoring soil health would help mitigate the effects of climate change. Increasing the amount of organic matter in soil enhances its ability to hold water. And improving soil structure would let more rainfall sink into the ground, where it can better sustain crops – especially during drought-stressed years – and help reduce flooding downstream. In addition to benefiting the climate, less fertilizer use will reduce off-farm water pollution.

Regenerative practices that focus on soil building bring other benefits too. For example, one 2006 study surveyed low-input, resource-conserving agricultural practices in 286 development projects across Latin America, Africa and Asia that employed cover crops for nitrogen fixation and erosion control and integrated livestock back into farming systems. It found that for a wide variety of systems and crops, yields increased an average of almost 80%. Results like these indicate that investing in soil-building practices would help feed a warming world.

When President John F. Kennedy called for a national effort to go to the Moon, the U.S. managed to do the unthinkable in under a decade. I believe it’s time now for a global “soilshot” to heal the land. Rebuilding healthy fertile soil on the world’s agricultural lands would require fundamental changes to agriculture, and a new agricultural philosophy. But consider who stands to lose from such a shift: corporate interests that profit from modern agrochemical-intensive farming and factory-farm livestock production. Who stands to gain? Everyone else.

This article is republished from The Conversation under a Creative Commons license. Read the original article here: http://theconversation.com/restoring-soil-can-help-address-climate-change-121733.