National Lab Back to Normal After Wildfire Scare 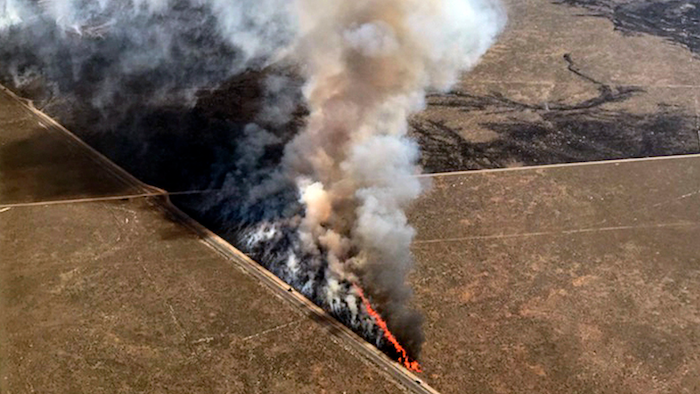 This photo provided by the U.S. Bureau of Land Management (BLM) shows wildfires burning in Idaho, Wednesday, July 24, 2019. The largest wildfire at the nation's primary nuclear research facility in recent history had been burning close to buildings containing nuclear fuel and other radioactive material, but a change in wind direction Wednesday was pushing the flames into open range at the sprawling site in Idaho, officials said. The lightning-caused fire at the Idaho National Laboratory is one of several across the U.S. West.
Bureau of Land Management via AP

BOISE, Idaho (AP) — The nation's primary nuclear research facility plans to go back to regular operations Thursday after a change in wind direction pushed a wildfire away from the sprawling site in Idaho.(View photos in gallery.)

The lightning-caused fire at the Idaho National Laboratory is one of several across the U.S. West.

Before the wind shifted, the Idaho blaze got close to several lab facilities, including one where high-level radioactive materials are studied and another holding a nuclear reactor, spokeswoman Kerry Martin said. She said she didn't know how close the flames got to those buildings.

The lab has several safety measures for wildfires that often ignite in southeastern Idaho's desert rangeland, including clearing ground around each building and having several specially trained fire crews stationed around the site that's nearly the size of Rhode Island.

"It's not our first rodeo," Martin said. "We have fire stations, a lot of fire equipment, we have trained firefighters and equipment to cut barriers."

The wildfire that ignited Monday is estimated to have burned about 176 square miles (456 square kilometers). Non-essential laboratory employees were evacuated. Lab officials said the fire was estimated to be 60% contained Wednesday evening.

The nuclear research site includes reactors and research materials, as well as facilities for processing high-level nuclear waste and other radioactive waste.

Wildfires are not uncommon on the sprawling nuclear sites scattered across the arid West. A blaze burned more than 62 square miles (161 square kilometers) last weekend near the Hanford Nuclear Reservation in Washington state, where most of the plutonium for the nation's nuclear weapons was created. That fire didn't threaten any buildings.

Timothy Judson, director of the Nuclear Information and Resource Service watchdog group in Takoma Park, Maryland, said there were concerns that fires near nuclear sites in California and Colorado could release radioactive material.

Meanwhile, rain in a forested Arizona city helped firefighters battle a wildfire that has raged for days in a scenic mountain pass but was raising the risk of flooding, officials said.

"You're not going to see an increase in acreage going forward," said fire information officer Steve Kliest. "If you did, it would be real modest."

Forecasters warned of possible flooding in Flagstaff neighborhoods with aging drainage systems below the fire. Thunderstorms skirted the fire earlier Wednesday but more are predicted Thursday — bringing the possibility of drenching the fire scarred-areas of the Coconino National Forest surrounding Flagstaff, a popular mountain getaway in the largest ponderosa pine forest in the U.S.

Warmer, drier weather is expected later in the week.

The area had not received any significant moisture in weeks and had no previous wildfires on record. That means the dense forest with lots of pine needles and grass will burn more intensely, creating a hard clay surface that quickly sheds water.

A team that will analyze the soil and look at ways to stabilize it was expected to arrive Thursday.

"It's not an easy task, but we're going to give it our best shot," Coconino National Forest supervisor Laura Jo West said at a community meeting Tuesday. "I can't guarantee results."

Residents ordered to evacuate more than two dozen homes this week were being allowed to return.

Ladd Vagen, his wife and two daughters were staying at a hotel and went home Wednesday to find everything exactly as they left it with an added smell of smoke.

Still, the family is on notice that they may have to flee again.

"I don't think we're going to unload our cars," Vagen said. "We may unload minimally and do a better job of organizing what we're going to take if we go back to 'go' status."

Sharan Winnicki and her husband returned to their home of 44 years and found concrete barriers that will be used to divert water in the neighborhood, a little smoke and reminders that the remodeling project they started months ago isn't done. She also planned to leave most of what they left with packed — documents, art, pictures, "things that we know if we had to start again ... would remind us of home," she said.

"It's exciting and I'm just so grateful for the team of people who were here, it's really amazing," she said. "I didn't expect to get back in this soon."

Arizona has declared an emergency, freeing up funding to battle the blaze. The firefighting cost to date is $2.1 million, incident commander Rich Nieto said.