It flew for a longer range than the platform has previously been approved.

The test flight performed at Yuma Proving Ground proved XQ-58A’s extended capabilities by flying longer, higher, at a heavier mission weight, and at a longer range than the platform has previously been approved for (based on prior government range limitations) and demonstrated. This flight was conducted with another of the Block 2 Valkyrie aircraft produced in the company-initiated 12-lot build and was the first flight for this tail number.

The flight was conducted with and demonstrated encrypted communications with redundant radios/communications packages for range and operational missions remote from government ranges. For the final test point, the aircraft navigated to the landing site in a simulated loss of communications scenario. It landed within the target zone, demonstrating key autonomous capability for the end of mission phase of flight and recovery of the aircraft without RF comms. This capability will help mitigate the possibility of enemy detection and tracking of RF comms emissions as the system returns to “base”. 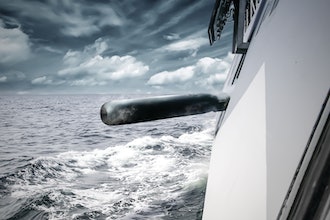