Documentary Looks at the Man Behind the Modern Bulletproof Vest

Richard Davis was a bankrupt pizzeria owner when he got the idea. 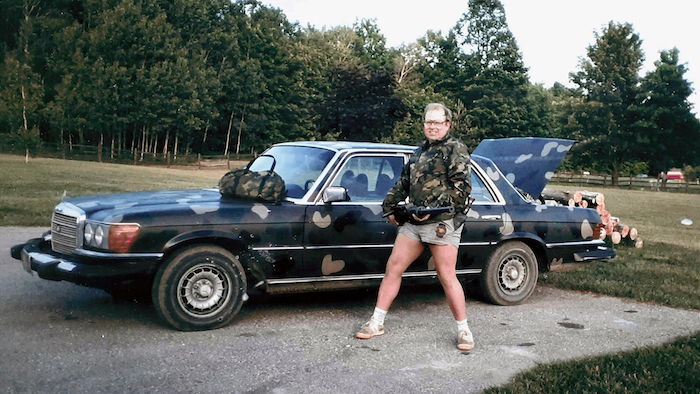 Richard Davis was a bankrupt pizzeria owner when he got the idea for a bulletproof vest in 1969 Michigan.

Body armor was nothing new, of course, but Davis had an inkling that he could make something lighter that could be worn, undetected, under clothes. Kevlar, he’d discover, was the answer. And to prove that his invention actually worked, Davis, a former Marine and born showman, went to some extraordinary lengths: He shot himself over 190 times.

Somehow, that’s not even the wildest part of his story, which is chronicled in the lively documentary “2nd Chance," which premiered this weekend at the Sundance Film Festival.

Utilizing new interviews with Davis, friends, enemies and ex-wives, the film charts the formation of his company Second Chance, its triumphs (saving hundreds of lives) and tragedies, including the death of a police officer after the company started using Zylon in its vest.

“2nd Chance” is the documentary feature debut of Ramin Bahrani, the Iranian-American filmmaker whose films often explore and dismantle notions of the American dream, including “Chop Shop and “99 Homes.”

He was editing his last feature, “ The White Tiger, ” when several producers approached him about making a narrative film about Davis. But Bahrani surprised them when he said he’d rather make a doc.

“I tried to go there not knowing and not having a set plan and just waiting for the people to tell me things,” Bahrani said. “With the short docs I had made, I remember calling Werner Herzog and asking him what’s the approach? His advice was don’t pre-interview people on the phone, don’t talk to them before you meet them. Just start rolling the camera and get those immediate interactions.”

Davis is an eccentric character who is at times shockingly candid and other times a wholly unreliable narrator, which Bahrani explores with a clear-eyed empathy.

“Some of what he says can be uncomfortable to hear and I don’t agree with his positions. But at the same time, he was charming, he was friendly. When we showed up every day and we would show up to meet him, he cooked mac and cheese for the crew and fed us cookies,” Bahrani said.

“What was interesting for me in Richard was, you couldn’t pin him down to just wanting to make a lot of money. I kind of agree with his second wife that he wasn’t motivated necessarily by money. But I do think he enjoyed being the star. There is a narcissism to him. There is an ability of believing his own deceptions that did remind me of a lot of people in power even in this country,” Bahrani continued.

“It reminds me of some modern or harsh version of Arthur Miller’s ‘All My Sons,’ where the father has a successful factory making airplanes for the war and the son comes to understand that some of these planes are faulty and resulted in the death of pilots. The father ends up really hitting a moral force from the son and it ends up in a suicide. There's a moral center to the play. Here, somehow that moral center within Richard’s own world seemed absent. He started another company that was even more successful, or just as successful. There’s something disturbing in that.”