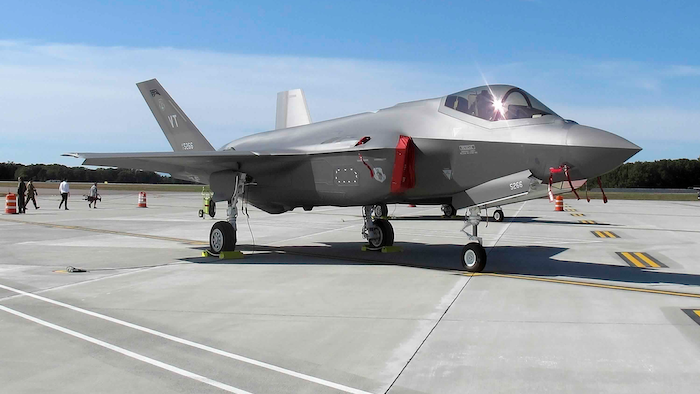 The United Arab Emirates on Tuesday, Dec. 14, 2021, suspended talks on a $23 billion deal to purchase American-made F-35 planes, armed drones and other equipment, in a rare dispute between Washington and a key U.S. ally in the Persian Gulf.
AP Photo/Wilson Ring, File

WASHINGTON (AP) — The United Arab Emirates on Tuesday suspended talks on a $23 billion deal to purchase American-made F-35 planes, armed drones and other equipment, in a rare dispute between Washington and a key U.S. ally in the Persian Gulf.

The Emirati Embassy in Washington said it would “suspend discussions" with the U.S., though meetings at the Pentagon this week between the two sides on other matters will be held as planned. “The U.S. remains the UAE's preferred provider for advanced defense requirements and discussions for the F-35 may be re-opened in the future,” the embassy said in a statement.

The proposed sale of 50 F-35s to the UAE came at the end of former President Donald Trump's administration, emerging from a deal that saw the Emiratis formally recognize Israel. President Joe Biden's administration put the deal on hold after he took office, in part due to criticism of the UAE and Saudi Arabia over their yearslong war in Yemen, which has sparked one of the world's worst humanitarian crises and continues today.

Also included in the deal are 18 advanced drone systems and a package of air-to-air and air-to-ground munitions.

Emirati officials blame an American insistence on restrictions on how and where the F-35s could be used and say they are a violation of the UAE's sovereignty.

Secretary of State Antony Blinken said the U.S. is prepared to move forward with the sales if the Emiratis decide to do so.

“We’ve wanted to make sure, for example, that our commitment to Israel’s qualitative military edge is ensured, so we wanted to make sure that we could do a thorough review of any technologies that are sold or transferred to other partners in the region, including the UAE,” he told reporters at a news conference in Kuala Lumpur with Malaysia’s foreign minister on Wednesday.

Pentagon spokesman John Kirby told reporters that U.S. requirements on the use of American-made military equipment “are universal, non-negotiable, and not specific to the UAE.”

“The U.S. partnership with the UAE is more strategic and more complex than any one weapon sale,” Kirby said.

A person familiar with the matter said the U.S. believes the Emiratis' move now is a negotiating tactic to try to move the process along. The person, who was not authorized to comment and spoke on the condition of anonymity, said the UAE letter notifying the U.S. of the suspension was written by a relatively low-level official.

The Wall Street Journal first disclosed the suspension of negotiations.

The UAE has long worked with the U.S. on counterterrorism and allowed the entry of people fleeing Afghanistan during the chaotic U.S. withdrawal earlier this year. But tensions between Washington and Abu Dhabi have risen over the UAE's growing cooperation with China.

Last week, a top Emirati diplomat acknowledged the UAE stopped construction on a Chinese facility at an Abu Dhabi port that America considered a military base. The Journal first revealed the presence of the alleged facility.

“We took these American concerns into consideration and we stopped the work on the facilities,” the diplomat, Anwar Gargash, told a meeting of the the Arab Gulf States Institute in Washington. “But our position remains the same, that these facilities were not really military facilities.”

He described the discussions between the UAE and the U.S. “as quite frank.”