Eight Marines and one sailor were killed when their amphibious assault vehicle sank last summer. 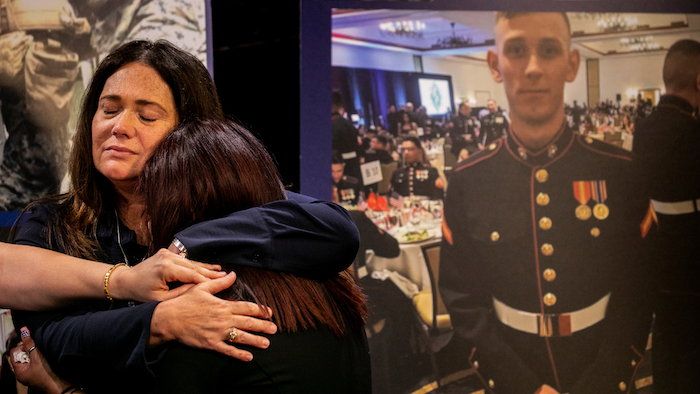 OCEANSIDE, Calif. (AP) — The families of eight Marines and one sailor who died when their amphibious assault vehicle sank off the Southern California coast last summer plan to sue the manufacturer of the vehicle that resembles an armored seafaring tank, their lawyers announced Thursday, a day before the anniversary of the accident.

BAE Systems knew for a decade or more about a design defect that makes it nearly impossible for troops to open the cargo hatches and escape the 26-ton amphibious vehicles when they sink, attorney Eric Dubin said at a news conference in Oceanside, the city bordering Camp Pendleton Marine Corps base, where most of the troops were based.

“They were kids, and they were put in a death trap," said Dubin, who was accompanied by relatives of five of the service members who died on July 30, 2020, and ranged from 18 to 22.

Dubin added that the troops were trapped inside for 45 minutes before the vehicle, known as an AAV, sank. Four Marines tried to use their body weight to force the hatch open, the lawyers said, adding that if the doors went inward and locked instead of to the outside, they could have gotten out in under two minutes.

He said the lawsuit would be filed within two days in U.S. District Court in San Diego.

The families cried as he spoke; three of the mothers embraced. Among them was Aleta Bath of East Troy, Wisconsin, who lost her only child.

She and her son would talk almost daily. Pfc. Evan A. Bath, 19, often forgot about the time difference between California and Wisconsin, calling her in the middle of the night.

“I still don't sleep because I'm waiting for a call that doesn't come," she said, crying. “I just want to make things safer so this doesn't happen to anybody else."

Military leaders agreed the tragedy could have been prevented. An investigation by the maritime branch found the accident off San Clemente Island was caused by inadequate training, shabby maintenance of the 35-year-old amphibious assault vehicles and poor judgment by commanders.

About a dozen Marine officers have been forced out of their jobs or disciplined in another way. The Marine Corps also relieved a two-star general in June who had overseen the exercise.

BAE Systems declined to comment on the expected lawsuit and directed questions to the Marine Corps.

“We offer our deepest sympathies to the families impacted by this tragedy and we mourn the loss of the nine service members," company spokesman Tim Paynter wrote in an email.

Lawyers for the families said they also would have considered suing the military but were prevented by the Feres doctrine, a 1950 decision that says service members cannot sue the federal government for injuries sustained while serving.

Instead, they are asking the military to support the lawsuit and pull its amphibious assault vehicles out of the water until the problem is resolved by the manufacturer. The Marine Corps did that for months while the accident was investigated, but recently troops have been back inside them in the water.

The troops who died were inside a decades-old amphibious vehicle, but lawyers said the newer ones, including a line now in production, have the same issue, which is why they are suing.

BAE Systems has a $366 million contract with the Marine Corps to produce 72 amphibious combat vehicles, which will replace the AAVs.

The Marine Corps said in a statement that “a comprehensive review of amphibious operations is being conducted by senior Marine Corps and Navy personnel" and that it is taking numerous actions to improve safety standards, including training troops to escape amphibious vehicles and ensuring the units using them are proficient in their skills. But it stopped short of saying it would stop using the AAVs.

It said it continues to mourn the loss of troops and is making safety a priority.

Christiana Sweetwood of Danville, Virginia, said she never wants another mother to experience what she has over the past year.

“When they took my son, they kind of took my life," she said through tears. “There's a hole in my family I can't fix. And I don't want another mother standing at a door at 7 a.m. and two casualty officers telling her that her son is missing."

His mother said she and the other families who lost loved ones plan to spend the anniversary of the accident together, sharing memories. She may put flowers in the ocean.

On Saturday, Sweetwood plans to visit her son's grave at Miramar National Cemetery in San Diego and eat his favorite dish — peach pie — to honor him on what would have been his 20th birthday.

The vehicles have been at the heart of the Marine Corps' amphibious operations, carrying troops from ship to shore for both combat and humanitarian operations since the early 1980s. It can traverse both land and sea.

The investigation found the troops had not received appropriate instruction on how to escape a sinking amphibious vehicle and that the unit had not completed a required evaluation meant to address any issues, including their swimming qualifications.

Marine officers in charge that day also failed to have safety boats nearby.