He planned to reverse-engineer the engines and supply his own version to the Chinese military. 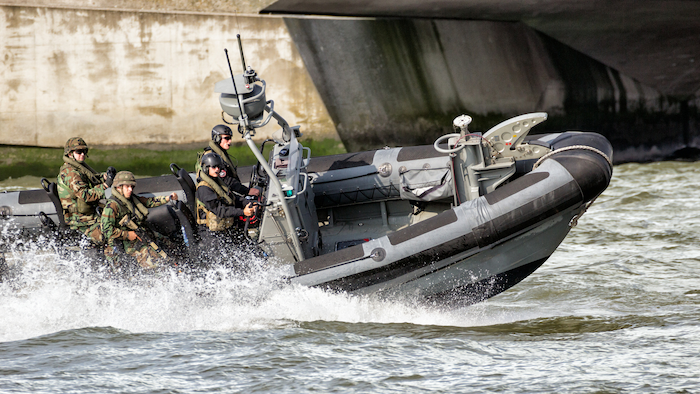 JACKSONVILLE, Fla. (AP) — A Chinese man who tried to buy and ship inflatable military boats from the U.S. to China was sentenced Friday to three years and six months in U.S. federal prison.

Ge Songtao, 51, pleaded guilty in federal court in Jacksonville, Florida, last November to conspiring to submit false export information to fraudulently export maritime raiding craft and engines to China and to attempting to fraudulently export that equipment, according to court records. In addition, the judge ordered Ge Songtao to forfeit more than $114,000.

U.S. District Judge Harvey Schlesinger found that Ge Songtao was planning to reverse-engineer the engines and supply his own version to the Chinese military.

Ge Songtao was the chairman of a Chinese company called Shanghai Breeze Technology Co. Ltd. when one of his U.S.-based employees, Yang Yang, attempted to order seven combat rubber raiding craft equipped with engines that can operate using gasoline, diesel fuel or jet fuel, according to the plea agreement. These vessels and multifuel engines are used by the U.S. military and can be launched from a submarine or dropped by an aircraft. No comparable engine is manufactured in China.

When the U.S. manufacturer suggested that Yang purchase cheaper gasoline-fueled engines, she insisted on the military-model multifuel engines, prosecutors said. Yang falsely told the manufacturer that her customer was based in Hong Kong rather than Shanghai, fearing the U.S. company would be less likely to sell to a company in mainland China, officials said.

To facilitate the purchase, Ge Songtao arranged wire transfers to a separate company in Hong Kong, which wired $114,834.27 to the U.S. manufacturer. He also coordinated plans to send an employee to Hong Kong to receive the raiding craft and engines and then send the equipment to mainland China.

Yang and another co-conspirator, Zheng Yan, have previously pleaded guilty in the scheme. They were later sentenced to time-served. A trial for a remaining co-defendant, Fan Yang, is scheduled to begin in August.