Beijing is interested in the types of so-called “exotic nukes" being developed by Russia. 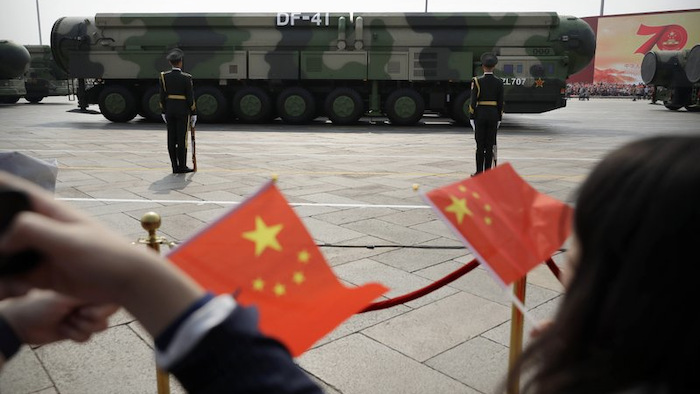 Military vehicles during a parade to commemorate the 70th anniversary of the founding of Communist China, Beijing, Oct. 1, 2019.
AP Photo/Mark Schiefelbein, File

Ambassador Robert Wood, the U.S. envoy to the Conference on Disarmament in Geneva, said China hasn't developed or been able to weaponize the technology yet. But his comments suggested that China is interested in such so-called “exotic nukes" like nuclear-powered underwater drones and nuclear-powered cruise missiles being developed by Russia.

“This is something they are looking at,” Wood said. “If they were to develop ... these kinds of weapons and aerial systems, this has the potential to change the strategic stability environment in a dynamic way."

The United States doesn't have either type of system.

“This is not where China was 10 years ago,” Wood added, noting the “upward trajectory” that China has been on in the quantity and quality of its weapons systems. “They’re pursuing weapons similar to some of the nuclear-powered delivery systems that the Russians have been pursuing.”

Russia has said its development of such weaponry is aimed at countering the United States' defenses against ballistic missiles. Moscow has expressed concern that such defenses could eventually undermine the viability of its strategic offensive nuclear forces, although Washington insists that its defensive system is designed to protect the U.S. homeland from North Korean missiles, not Russia's or China's.

But “it’s not surprising that China would be developing and exploring technologies they see others working on,” Kristensen, an experienced analyst of Chinese, Russian and American nuclear arsenals, wrote in an email.

He noted that developing weapons technology but leaving it on the shelf, rather than deploying it, “is an old trademark of the Chinese.”

Wood's comments are part of a broader push by the United States to draw China into strategic talks. He decried a lack of transparency from Beijing and a shortage of U.S.-China communication along the lines of that between the U.S. and Russia — and the former Soviet Union — for decades.

“Until China sits down with the United States bilaterally, the risk of a devastating arms race will continue to increase — and that’s in the interest of no one,” he said.