The Air Force plans to phase out its decades-old JSTARS system in coming years.

ROBINS AIR FORCE BASE, Ga. (AP) — The Air Force said it plans to phase out its decadesold JSTARS aircraft and radar system used for battlefield surveillance and replace it in central Georgia with new missions driven by upgraded technology.

The JSTARS mission is shared by both active duty airmen and Georgia Air National Guard members at Robins Air Force Base south of Macon. Since 1991, the system has used large Boeing 707 planes to gather battlefield information from the air for use by U.S. commanders.

The move will allow 2,000 active duty and National Guard airmen at Robins to transition to four new missions coming to the base, Roth said. They include the Advanced Battle Management System, an intelligence-gathering network under development that allows real-time sharing of battlefield information between satellites in space, military aircraft, ground forces and commanders.

U.S. Rep. Austin Scott, a Georgia Republican whose district includes Robins Air Force Base, said the JSTARS program, while effective for decades, has become “old technology and we have to move to new technology to protect the United States."

“These upgrades will ensure that this base is strong for decades to come,” Ossoff said. “These are cutting edge capabilities. ... We're glad they're coming to Georgia.” 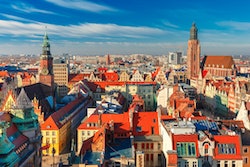