The Air Force plans to distribute bottled water to thousands of nearby residents and business owners. 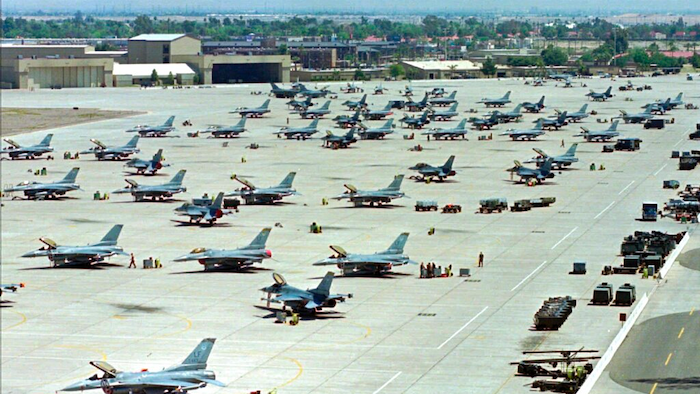 PHOENIX (AP) — The U.S. Air Force says it will be distributing bottled water to thousands of residents and business owners near its base in suburban Phoenix until at least April, marking the latest case of chemicals from military firefighting efforts contaminating the water supply in a nearby community.

Luke Air Force Base announced this month that studies showed high levels of contaminants had affected drinking water for about 6,000 people in roughly 1,600 homes as well as a few neighboring businesses.

A contractor is scheduling deliveries of drinking water to the homes of people who picked up their first bottles this week, said Sean Clements, chief of public affairs for the 56th Fighter Wing at the base. Those deliveries will go on until a long-term filtration facility can be set up in April, Clements said Thursday.

The base has recommended people use bottled water for drinking and cooking but deemed tap water safe for bathing and laundry.

Similar contamination tied to the use of firefighting foam has been found in water supplies near dozens of military sites in Arizona, Colorado and other states and has triggered hundreds of lawsuits. Growing evidence that it's dangerous to be exposed to the chemicals found in the foam has prompted the U.S. Environmental Protection Agency to consider setting a maximum level for those chemicals in drinking water nationwide.

But they aren’t regulated now, meaning the base can't be punished even though the EPA says the chemicals stay in the body for long periods and may cause adverse health effects.

The Arizona Corporation Commission, which regulates utilities, is scheduling an emergency meeting next week with five water companies to discuss concerns about the contamination, said Caroline Oppleman, spokeswoman for the Arizona Department of Environmental Quality.

Oppleman said her agency is working with the base, regulators and federal and local officials to ensure actions are taken to ensure healthy drinking water for residents.

A statement from Luke Air Force Base last week said testing had detected levels of perfluorooctanoic acid and perfluorooctane sulfonate above the EPA’s health advisory for how much should be consumed in drinking water over a person's lifetime.

The so-called forever chemicals from a class known collectively as PFAS were found during tests of water from Valley Utilities Water Co. The compounds are used in many industrial and consumer products and in foam used by commercial industries and the armed services to extinguish fuel fires.

The company said its water meets all EPA and Arizona drinking water standards and that no treatment is required because PFAS are not regulated by federal or state environmental agencies. Chief Financial Officer Bryan Thomas said the utility nevertheless is working with the base on “additional sampling and potential water treatment options.”

Brig. Gen. Gregory Kreuder, commander of Luke Air Force Base, said a study showed the chemicals may have affected “supply wells that provide drinking water” to properties nearby.

“We share community concerns about the potential impact of these compounds on drinking water,” he said.

The contamination problem is well known in neighboring New Mexico, where chemicals from several bases have seeped into local water supplies.

The state sued the U.S. Air Force in 2019 over groundwater contamination at Cannon and Holloman air bases, saying the federal government has a responsibility to clean up plumes of toxic chemicals left behind by past military firefighting activities.

In court documents, the state describes the contamination detected at the bases as shocking, saying it migrated into public and private wells that provide drinking water and livestock and irrigation water to surrounding communities.

New Mexico said its dairy industry has been affected as well as residential and commercial property values.

This year, the state challenged a federal court's decision to combine its lawsuit over contamination at Air Force bases with similar litigation brought by hundreds of other jurisdictions nationwide.

The New Mexico attorney general’s office and state Environment Department argue the decision to centralize the claims violated the state’s sovereignty and could lead to extreme delays that further endanger public health and the environment.

The U.S. Air Force Academy in 2019 said unsafe levels of PFAS chemicals were found in groundwater at four sites on its Colorado Springs campus, south of Denver. The chemicals also have been discovered around the Peterson Air Force Base in Colorado Springs.