Protesters claim deadly weapons are made at the Elbit Ferranti factory. 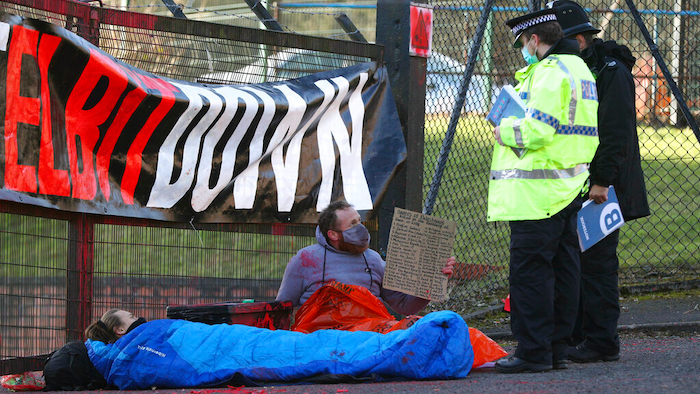 LONDON (AP) — Protesters have blocked the entrance of an Israeli-owned factory in England where they claim deadly weapons are made.

Activists from Palestine Action and Extinction Rebellion chained the gates of the Elbit Ferranti factory in Greater Manchester early Monday. Two protesters climbed onto a ledge in front of the building, daubing red paint over the windows and spraying the words “Shut Elbit Down.”

The two groups said their joint action was meant to show Elbit, Israel’s largest arms firm, that they will “continue to take direct action until we shut Elbit down and end all complicity in systematic injustice.”

Greater Manchester Police said officers were sent to the scene. Elbit Systems UK, which has 10 sites across the U.K., declined to comment.

The company employs over 500 people in the U.K. in high-tech and specialist manufacturing, and it also supplies a fleet of 38 aircraft to the U.K. military flying training school.