The deadline to extend a nuclear arms deal with Russia is approaching as China looks to expand its nuclear forces. 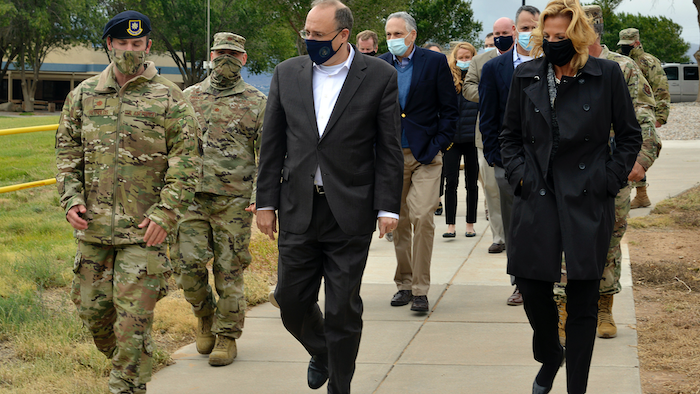 ALBUQUERQUE, N.M. (AP) — The Trump administration has sketched out a framework that it hopes will avoid a three-way arms race as a deadline nears for extending the only remaining nuclear arms control deal with Russia and as China looks to expand its nuclear forces.

Ambassador Marshall Billingslea, the special presidential envoy for arms control, spoke with The Associated Press about negotiations with Russia while touring some of the top nuclear research labs and production sites in the United States.

Last week’s visit to New Mexico, Texas and Tennessee comes as facilities ramp up modernization of the country’s multibillion-dollar nuclear enterprise, which includes capabilities for producing the plutonium cores used in warheads and technology for aiding nonproliferation of weapons around the globe.

Billingslea said the proposed agreement would be ambitious and that the time is right to “go down this path.”

“As President Trump has made clear, he intends to and has shown a way ahead with the Russian federation — and ultimately with China — that we can do something that no one has ever done before,” he said.

Signed in 2010, the New START treaty limits the United States and Russia to no more than 1,550 deployed nuclear warheads and 700 deployed missiles and bombers. It represents the only remaining nuclear arms control deal between the two countries after they both withdrew from the 1987 Intermediate-range Nuclear Forces Treaty last year.

Billingslea said the existing New START treaty has loopholes and that any new agreement with Russia should cover all nuclear warheads and bolster verification protocols and transparency. With such an agreement in place, he said China ultimately would not have much of a choice and would need to join such a framework.

“The world is not going to sit by and allow China to simply do what it currently thinks it’s going to do in terms of more than doubling it’s nuclear stockpile,” he said. “So the president has made clear he doesn’t want a three-way arms race. It’s completely counterproductive and unnecessary."

Arguing that its stockpile is small, China has said it would participate only if the U.S. agrees to nuclear parity among all nations. Russia has suggested that if China were part of the pact, other countries would need to be included as well.

Billingslea said the U.S. wants to work toward joint verification experiments with Russia and China, noting that previous iterations of the treaty had allowed for such work before it was renegotiated a decade ago by the Obama administration.

“We need to get the experts together to get comfortable with technical solutions that enable meaningful arms control going forward,” he said, with the goal being security and stability in Europe and Asia.

Still, the Trump administration and Congress are pushing ahead with plans started during the Obama administration to ensure the United States' own nuclear capabilities. Billions of dollars are being funneled toward work to replace aging plutonium cores in the arsenal and projects managed by the National Nuclear Security Administration at Los Alamos and Sandia national labs in New Mexico and other federal sites tied to the nuclear program.

Much of the infrastructure across the complex is decades old. NNSA Administrator Lisa Gordon-Hagerty, who also visited last week, said work has been deferred in some cases for as many as 30 years.