China Trails Only US in Arms Production

A Swedish arms watchdog said its research marks the most comprehensive picture of Chinese companies’ weapons production to date. 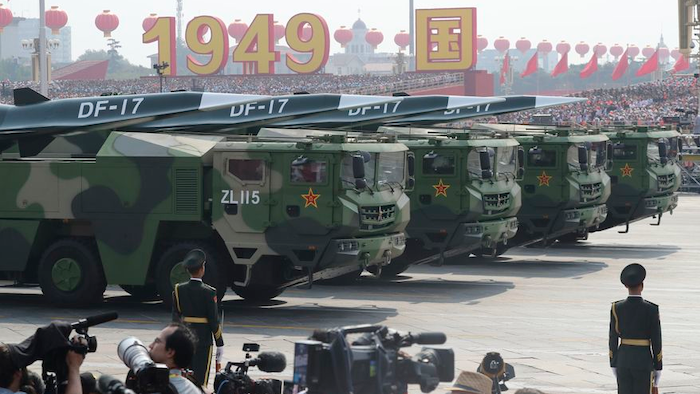 Military vehicles during the parade to commemorate the 70th anniversary of the founding of Communist China in Beijing, Oct. 1, 2019.
AP Photo/Ng Han Guan

COPENHAGEN, Denmark (AP) — China is the second-largest arms producer in the world behind the United States but ahead of Russia, a Swedish arms watchdog said Monday.

The Stockholm International Peace Research Institute, or SIPRI, said the research is the most comprehensive picture of Chinese companies’ weapons production to date.

In its annual report, SIPRI said it had “identified information from 2015–17 on the value of arms sales by major Chinese arms companies,” and looked at four companies that cover three sectors of conventional arms production: aerospace, electronics and land systems, “for which credible financial information is available.”

In the past, a lack of transparency has meant that the value of Chinese companies’ arms sales has been either unknown or difficult to reliably estimate, SIPRI said to explain why the Chinese arms companies previously were not included in its annual ranking of the world’s 100 largest arms-producing and military services companies.

SIPRI added that with the increase of available data on these companies, it is now possible to develop reasonably reliable estimates of the scale of the Chinese arms industry and the four major Chinese arms companies chosen for the study “can now finally be compared with the major arms companies from the rest of the world.”

The institute released figures for 2017 and said that of the 20 largest companies 11 were based in the U.S., 6 in Western Europe and 3 in Russia. If the four Chinese arms companies were included in the study, they would all rank among the top 20, with combined estimated arms sales totaling $54.1 billion. Three of the companies would be ranked in the top 10.