The Mississippi River is finally low enough to begin closing a huge spillway after a record-breaking run diverting water into Lake Pontchartrain. 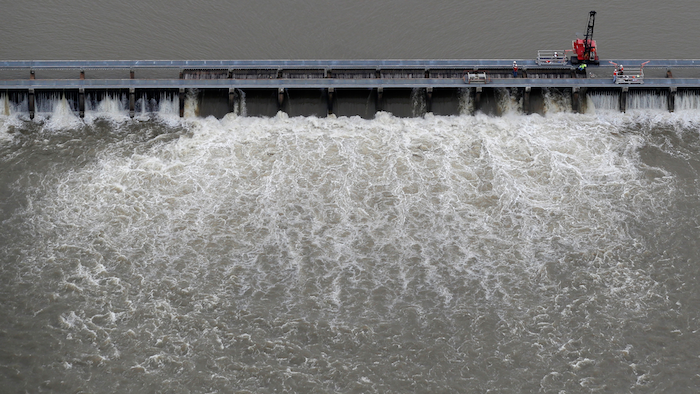 In this May 10, 2019, file photo, workers open bays of the Bonnet Carré Spillway in Norco, La.
AP Photo/Gerald Herbert, File

The corps said Monday in a news release that about 10 of the 168 open bays in the Bonnet Carré ("Bonnie Carrie") spillway would be closed by day's end.

Spokesman Matt Roe says full closing is expected to take about a week, with daily checks to make sure the river remains low enough to avoid stressing New Orleans' levees. The spillway was created to limit the river's rush past New Orleans, keeping it below 1.25 million cubic feet (35,400 cubic meters) per second — an amount that would fill the Empire State Building in 30 seconds.

The May opening took 11 days, using cranes to pull up 20 huge timbers, called needles, in each bay. In June, it broke the one-year record of 75 days open, set in 1973.

Since Monday was the spillway's 74th consecutive day open, the current event will tie that 1973 record for straight days open on Tuesday and break it on Wednesday, Roe said. The spillway was open for 48 days in 1937 and 57 in 1945.

The amount of water passing through the spillway peaked on May 21 and 22 at 161,000 cubic feet (4,560 cubic meters) per second. That's enough water to fill the U.S. Capitol rotunda in about 8 seconds.