If the machines fail to boost river oxygen levels sufficiently, the problem could halt a $973 million harbor expansion project at the Port of Savannah. 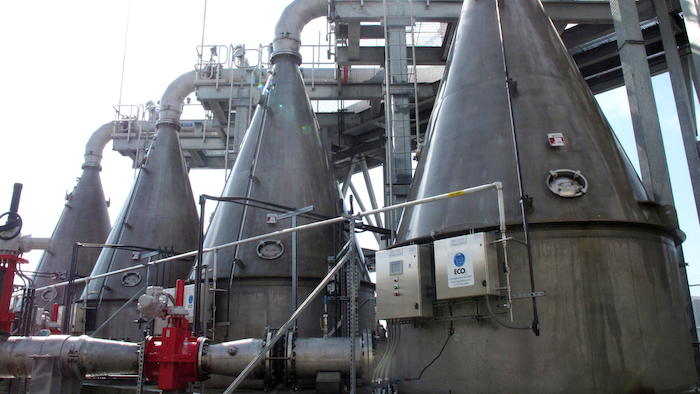 In this Feb. 21, 2019, photo, four cone-shaped machines designed to mix oxygen into river water and inject it back into the Savannah River stand on the shore of the waterway in Savannah, Ga.
AP Photo/Russ Bynum

A loud hum drones from a twisting array of machines and pipes connected to four towering metal cones that mix water from the Savannah River with oxygen filtered from the air before pumping it all back down to the river bottom at a rate of 30,000 gallons each minute.

The Army Corps of Engineers has finished the first of two large oxygen-injection stations on the river. The machines are the agency's $100 million solution to help fish breathe along a 27-mile (43-kilometer) stretch linking the Port of Savannah to the Atlantic Ocean. Otherwise, the waterway is expected to lose oxygen toward the bottom as it's deepened by 5 feet (1.5 meters) to make room for larger cargo ships.

If the machines fail to boost oxygen levels in the river sufficiently, it could jam up the whole $973 million harbor expansion project with dredging only halfway done. That's because a 2013 court settlement between the Army Corps, conservation groups and state officials in neighboring South Carolina hinges on proof that the injectors work as promised.

Army Corps scientists began running tests on Valentine's Day and plan to keep testing until mid-May. They're trying to measure how much of the extra oxygen being shot into the river stays in the water, versus how much breaks the surface and escapes into the air.

"The requirement is to put 12,000 pounds of oxygen into the water column," said Beth Williams, hydrology branch chief for the Army Corps' Savannah District. "We feel pretty good that we'll get there."

Once both injection stations are finished, the river will have 12 of the cone-shaped oxygen machines that function like giant versions of the bubblers in home aquariums. The machines are intended to compensate for a small expected drop in dissolved oxygen near the river bottom that's home to blue crabs, striped bass and endangered shortnose sturgeon.

Rivers naturally take in oxygen from the air, and their flows help mix it down below the surface. But as the water gets deeper, it's harder to push oxygen to the bottom. That's especially true in the Savannah harbor, where the land is flat and motion is slowed by pushback from the ocean tides. Decades of dredging have further stressed oxygen levels.

The problem gets worse in the hot summer months, when dissolved oxygen in the river has been known to drop below minimum standards set by Georgia and South Carolina. The river forms the border between the two states.

The Army Corps plans to run the oxygen injectors indefinitely, from roughly June through September each year. The agency estimates it will cost $3 million per year, said Spencer Davis, the agency's project manager for the harbor expansion.

Conservation groups have questioned whether machines will truly offset the oxygen loss inflicted by further dredging. Chris DeScherer, an attorney for the Southern Environmental Law Center, has compared them to placing the river on a respirator.

The law center initially sued the Army Corps in federal court, arguing the deepening project would cause irreparable damage. A settlement reached in 2013 included additional environmental mitigation by the Corps. It also requires extensive tests to show the oxygen injectors work before dredging can start on the half of the project furthest upriver toward the port.

If the machines fall short, any party to the lawsuit would be able to scrap the settlement and return to court.

"We don't want to pre-judge the result," DeScherer said by email. "In general, we've always been concerned about the concept of using a mechanical system to re-oxygenate a large tidal river."

On Thursday, scientists from the Army Corps used boats to monitor the river near the oxygen-injection station as red dye was added to the water being pumped to the bottom. Colored streaks could be seen on the surface as the scientists used instruments to measure how the dyed, oxygenated water was dispersing.

Sensors in the water will be used in the coming months to measure oxygen levels through two full lunar cycles to account for changes in the tides, which can affect how much oxygen naturally gets mixed into the river.

Pumping oxygen mechanically into water has been done since the 1960s, though usually in smaller bodies such as reservoirs and lakes.

Still, the amount of dissolved oxygen the Corps is trying to replace is .01 milligrams per liter of water, while the average amount of oxygen in the river is at least 400 times greater, said Bryan Robinson, an Army Corps hydraulic engineer.