Researchers at the University of California-Davis have developed a robot arm that can taste.

The researchers created a robotic gripping arm that uses engineered bacteria placed in pockets in the fingers to taste for specific chemicals. The proof-of-concept soft robot is the next step towards biological-mechanical hybrid machines, or more human robots.

The new device has a complicated simplicity. The robot gripper uses a biosensing module that includes little, flexible pockets that hold an E. coli bacteria engineered to respond to the chemical IPTG. When it detects the chemical, it lights up and the electrical signal is sent to the gripper's control unit.

In tests, the gripper checked bath water for IPTG. Basically, it looks like it's dipping a toe (or entire robot hand) in a tiny pool. The tests took about 10 hours, but the idea is that the hand can sense if the chemical is in the water. If it doesn’t detect the chemical, it essentially deems it safe, grabs an object (a ball), and dips it in the pool.

Right now, the work is preliminary. The biohybrid bot can only taste one thing and it can't detect changing concentrations. It's also difficult to keep the microbes stable.

According to the researchers, biohybrid systems could one day include bacteria engineered for different functions, like detecting chemicals, making polymers for repairs or even generating energy. So, one day these tiny tongues won't just taste, but they'll feed. 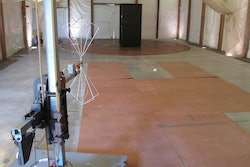