The system could soon offer real-time, noninvasive analysis of human breath to detect and monitor diseases. 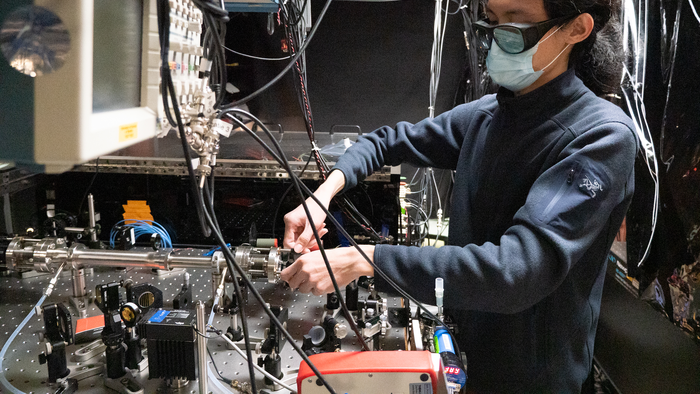 JILA scientists have boosted the sensitivity of their decade-old frequency comb breathalyzer a thousandfold and can detect additional biomarkers of disease — four now, with the potential for six more. When validated and engineered into a portable design, the comb system could offer real-time, noninvasive analysis of human breath to detect and monitor diseases. JILA is jointly operated by the National Institute of Standards and Technology (NIST) and the University of Colorado Boulder.

The JILA system “fingerprints” chemicals by measuring the colors and amounts of light absorbed as a laser frequency comb passes back and forth through breath samples loaded into a mirrored glass tube. Recent upgrades include a shift in the light spectrum analyzed from the near-infrared to the mid-infrared band, where more molecules absorb light, and advances in optical coatings and several other technologies to achieve detection sensitivity up to the parts-per-trillion level.

As described in Proceedings of the National Academy of Sciences, NIST/JILA Fellows Jun Ye and David Nesbitt detected and monitored four biomarkers — methanol (CH3OH), methane (CH4), water (H2O) and a form of heavy water (HDO) — in the breath of a volunteer. These are indicators of health conditions such as, in the case of methane, intestinal problems.

The researchers say it is feasible to use the same apparatus to detect six more chemicals: formaldehyde, ethane, carbonyl sulfide, ethylene, carbon disulfide and ammonia. In addition, extending the comb lasers further into the infrared should greatly expand the detection capability and enable the identification of many hundreds of trace breath chemicals.

JILA researchers demonstrated a prototype comb breathalyzer in 2008 but did not develop it further at that time. They have now refocused on it, prompted by the possibility of eventually testing for COVID-19.

“We are really quite optimistic and committed to pushing this technology to real medical applications,” Ye said.

The most widely used analytical technique in breath research is gas chromatography combined with mass spectrometry, which can detect hundreds of exhaled molecules but works slowly, requiring tens of minutes. Most optical breath tests approved by the U.S. Food and Drug Administration detect only one chemical. JILA is the only institution that has published research on comb breathalyzers, Ye said.

Ye and Nesbitt are now working with other NIST researchers to engineer a compact version of the breathalyzer. The tube is only 55 centimeters (21.7 inches) long, but the laser comb is custom-made and somewhat bulky.

The work is funded by the Air Force Office of Scientific Research, the National Science Foundation and NIST.