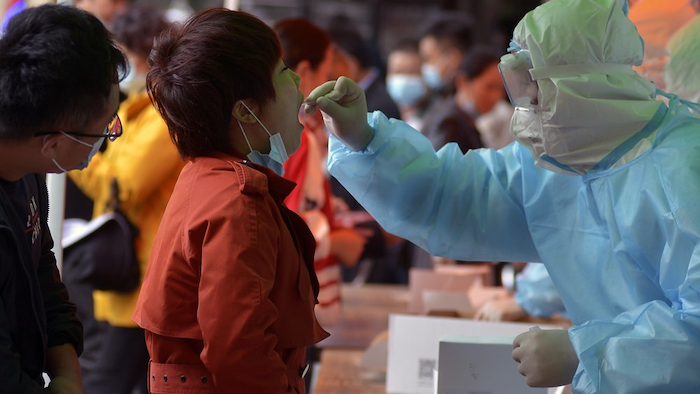 Medical staff takes a swab from a woman as residents line up for a COVID-19 test near a residential area in Qingdao, China, Oct. 12, 2020.
Chinatopix via AP

TAIPEI, Taiwan (AP) — Two amateur Chinese computer coders who were jailed after archiving deleted news articles about the pandemic’s initial outbreak are set to be released next week after more than a year behind bars, one of their relatives said Saturday.

The two men, Chen Mei and Cai Wei, are set to be released Sunday, said Chen’s brother Chen Kun. They were taken away by Chinese police in April last year.

He said the Wenyuhe People’s Court on Friday handed down a sentence of one year and three months, to be applied retroactively, on the charge of “picking quarrels and stirring up trouble." The vague catch-all charge is often used for politically sensitive cases.

“After I heard the news, I really feel much lighter,” said Chen Kun in a phone interview Saturday. ”Over the course of the past year, every day I would think, ‘How do I do something about this situation?’"

The two young men, who became friends when they were both teenagers, built an archive called Terminus2049 where they kept hundreds of censored articles that had been deleted from the Chinese internet. They also built a forum where people could discuss sensitive issues, including the anti-government protests in Hong Kong and the ruling Communist Party.

Friends and family have said what may have caught authorities' attention appears to be their work in archiving articles showing China's early pandemic response after the initial outbreak in the central city of Wuhan.

The two do not plan to appeal the sentence, Chen said.