German Lawmaker to Resign After Firm Profited from Masks

A company he runs earned commissions of nearly $300,000 from brokering contracts to buy masks early in the pandemic. 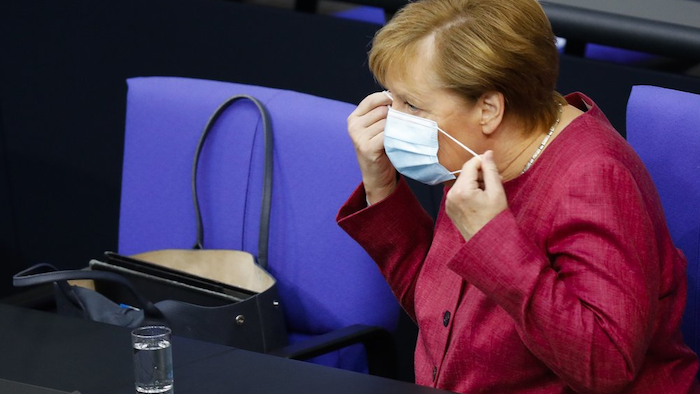 BERLIN (AP) — A lawmaker with German Chancellor Angela Merkel's party said Sunday he will give up his seat in parliament and leave politics after it emerged that his company profited from deals to procure masks early in the pandemic — drawing sharp criticism in an election year.

Nikolas Loebel, a backbench lawmaker with Merkel's center-right Christian Democratic Union, was blasted by members of his own party and opponents after it emerged Friday that a company he runs earned commissions of 250,000 euros (nearly $300,000) from brokering contracts to buy masks. Saying that he should have been “more sensitive," Loebel admitted that he had made a mistake and gave up his seat on parliament's foreign affairs committee.

That wasn't enough for critics — particularly as his home state of Baden-Wuerttemberg elects a new regional legislature on March 14. A national election in which Germans will choose a new parliament, and determine who succeeds Merkel, follows on Sept. 26.

On Sunday, Loebel said he will leave the Union bloc's group in parliament immediately and give up his seat at the end of August. He apologized and said he won't run in the September election, the dpa news agency reported.

“I am taking responsibility for my actions,” he said.

On Friday, Nuesslein's lawyer said he won't run for reelection in September and is giving up his position as a deputy leader of the Union's parliamentary group.

Many weren't satisfied with the pair's announcements. Defense Minister Annegret Kramp-Karrenbauer, who led the CDU until January, tweeted that Loebel and Nuesslein must go a step further and immediately give up their seats in parliament.

“When we are all working at every level of politics ... to get the country through the crisis well and individuals do business, then they must simply leave parliament,” new CDU leader Armin Laschet told ARD television. “And that means, also to protect all the others who are trying really hard: consequences — quickly and immediately.”

“Representatives of the people must not profit in the crisis,” Laschet said.

Nuesslein said later Sunday that he will leave the Union's parliamentary group immediately, but plans to keep his seat in parliament until the election.