The EU lashed out at the drugmaker after it said it could only supply 31 million out of 80 million initial shots. 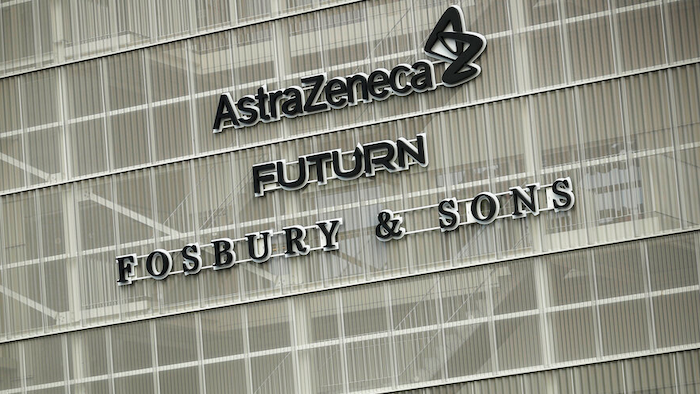 BRUSSELS (AP) — The European Union and AstraZeneca agreed Friday to make public a heavily redacted version of their coronavirus vaccine agreement, which lies at the heart of a dispute over how many shots the pharmaceutical company should be supplying the EU's 27 nations.

The contract, agreed to last year by the European Commission and the drugmaker, allows the EU’s member countries to buy 300 million doses of the AstraZeneca vaccine, with an option for a further 100 million doses. It’s one of several contracts the EU’s executive branch has with vaccine makers to secure a total of more than 2 billion shots.

As part of the “advanced purchase agreement" with vaccine companies, the EU has invested 336 million euros ($408 million) to finance the production of AstraZeneca vaccines at four factories.

But the EU lashed out at the British-Swedish drugmaker this week after it said it would not be able to deliver the 80 million doses that it hoped to provide initially and could only supply 31 million. Brussels claimed AstraZeneca would supply even less than that, just one-quarter of the doses due between January and March, and, member countries began to complain.

The European Commission, which is the EU"s executive arm, is concerned that doses meant for Europe might have been diverted from an AstraZeneca plant on the continent to the United Kingdom, where two other company sites are located. The EU also wants doses at two sites in Britain to be made available to European citizens.

AstraZeneca CEO Pascal Soriot told Germany's Die Welt newspaper this week that the U.K. government helped create the vaccine developed with Oxford University and signed its contract three months before the EU did. Soriot said that under the British contract, vaccines produced at U.K. sites must go to the U.K. first.

The “advanced purchasing agreement” with the EU was signed in August, before the Oxford-AstraZeneca vaccine had been properly tested. The European Medicines Agency is expected to approve the vaccine later Friday, although questions remain over how effective it is among people over age 65.

Much of the 41-page document made public was blacked out, making it very difficult to establish which side is in the right. Details about the price of the vaccine were notably redacted. The U.K. is thought to be paying far more for the vaccine than EU countries.

An EU official said 95% of the blackened text is a result of requests from AstraZeneca.

Asked about details concerning the heart of the row - exactly how many doses were promised to be delivered to the EU and when -European Commission spokesman Eric Mamer said: “We cannot give you the numbers, they have been redacted from the contract.”

To the uninitiated, the contract is not easily understood. However, it is laden with references to a “Best Reasonable Effort” being made on items like deliveries and volumes, given the uncertainty surrounding the development of the vaccine when it was drafted.

AstraZeneca might say only it can decide whether it’s doing its best, but the EU argues that this is a legal term and that only a judge can decide whether the company has made a “Best Reasonable Effort,” meaning the truth of the matter might lay in the hands of the two sides' lawyers.

To head off further such disputes and allay fears that vaccines might be diverted, the Commission will present plans later Friday to tighten rules on the exports of shots produced in the 27 EU countries.

The proposed “vaccine export transparency mechanism″ would be used to block shipments to non-EU countries and ensure that any exporting company based in the EU first submits its plans to national authorities.

Customs agencies would be allowed to check the plans before the Commission gives its authorization or refusal.

“We want to put in place export licenses to know what comes out of each production unit, where these doses go, and if some of them go outside the union even though they have been ordered by the EU,” EU Justice Commissioner Didier Reynders told broadcaster RTBF.

Humanitarian deliveries would not be affected by the new mechanism.