The kit includes a nasal swab, chemical solution and testing strip, and connects to a smart phone app that displays the results. 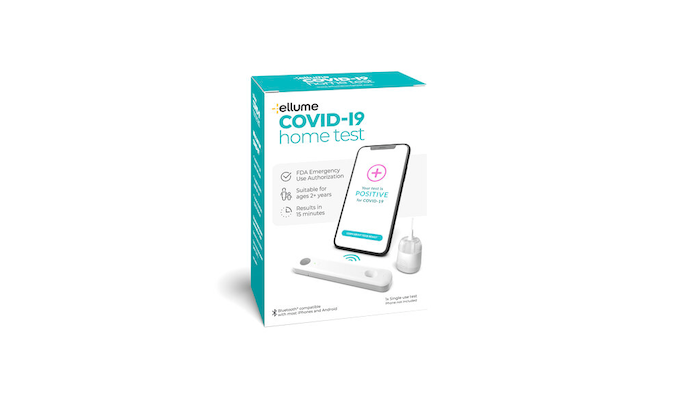 WASHINGTON (AP) — The first home test for COVID-19 that doesn't require a prescription will soon be on U.S. store shelves.

U.S. regulators Tuesday authorized the rapid coronavirus test, which can be done entirely at home. The announcement by the Food and Drug Administration represents another important — though incremental — step in efforts to expand testing options.

Regulators granted emergency use for a similar home test last month, but that one needs a doctor’s prescription.

The agency's action Tuesday allows sales in places like drugstores "where a patient can buy it, swab their nose, run the test and find out their results in as little as 20 minutes,” said FDA Commissioner Stephen Hahn, in a statement.

Initial supplies of the over-the-counter test will be limited. Australian manufacturer Ellume said it expects to produce 3 million tests next month before ramping up production over the first half of 2021.

A company spokesperson said the test will be priced around $30 and be available at pharmacies and for purchase online.

The kit includes a nasal swab, a chemical solution and a testing strip. The test connects digitally to a smart phone app that displays the results and then helps interpret them. Users can also connect with a health professional via the app.

For months, health experts have stressed the need for fast, widespread home testing so that people can screen themselves and avoid contact with others if they have an infection. But the vast majority of tests still require a nasal swab performed by a health worker that must be processed at high-tech laboratories. That typically means waiting days for the results. About 25 tests allow people to collect their own sample at home— a nasal swab or saliva — but then that's shipped to a lab.

Ellume’s test looks for viral proteins shed by COVID-19, which is different from the gold standard tests that look for the genetic material of the virus.

Like other tests that scan for proteins, FDA officials noted that Ellume’s test can deliver a small percentage of false positive and false negative results. People who get a negative result but have coronavirus symptoms should follow up with a health professional, the agency said.

Currently the U.S. is testing nearly 2 million people daily. Most health experts agree the country needs to be testing many times more and researchers at Harvard have pushed for cheap, paper home tests.

Still, Dr. Michael Mina of Harvard called the new test “a great addition," to existing options, though he cautioned that its price could limit access.

“This is a milestone, with reservations,” Mina said in an email. “I just hope it doesn’t drive more of a wedge between haves and have nots."

For people with insurance, federal law requires that plans cover the cost of COVID-19 testing.