CureVac is working on a potential vaccine for the coronavirus. 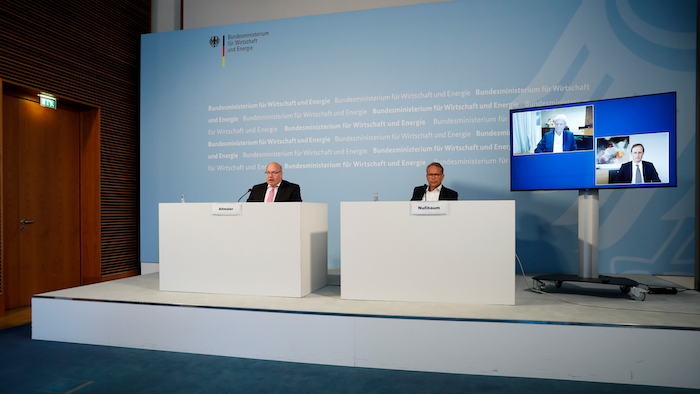 BERLIN (AP) — The German government said Monday it is taking a 23% stake in CureVac, a German company working on a potential vaccine for the coronavirus, underlining its determination to keep key industries in the country.

“For me and for the whole German government, it is ... absolutely elementary that we preserve and strengthen promising key industries in Germany, be they digital, artificial intelligence industries; electric batteries; the chemical industry, the steel industry and many others,” Altmaier said. “That goes in particular for biotechnology and life sciences.”

In March, Chancellor Angela Merkel’s chief of staff, Helge Braun, said that German officials had had “very intensive contact” with CureVac and that there had been “thoughts of enticing it to the United States.”

He didn’t elaborate on the nature of the U.S. interest. CureVac and the then-U.S. ambassador to Germany rejected a newspaper report at the time that President Donald Trump apparently had offered the German firm a large amount to secure its work for the U.S.

Altmaier acknowledged that “the development of vaccines — and medical products in general — can come with risks and the possibility of failure.”

“But we must examine every opportunity, and we must give innovative companies the opportunity to prove themselves,” he added. “And I am convinced that CureVac deserves such a chance.”

The announcement that the government will acquire a stake in CureVac comes only two days after drugmaker AstraZeneca struck a deal with a vaccine alliance formed by Germany, France, Italy and the Netherlands to supply up to 400 million doses of an experimental COVID-19 vaccine. All other European Union member states will have the chance to take part.

Other companies, including Moderna and Sanofi, are racing to develop and produce a vaccine to protect against the new coronavirus, a step experts say will be crucial to allowing countries to ease public health lockdowns and restrictions on public life.