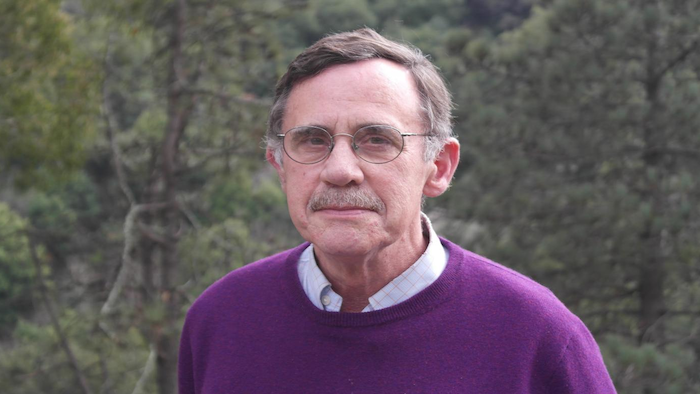 AMHERST, Mass. - In a new paper, Thomas Russell and postdoctoral fellow Ganhua Xie, at the University of Massachusetts Amherst and Lawrence Berkeley National Laboratory, report that they have used capillary forces to develop a simple method for producing self-assembling hanging droplets of an aqueous polymer solution from the surface of a second aqueous polymer solution in well-ordered arrays.

"These hanging droplets have potential applications in functional microreactors, micromotors and biomimetic microrobots," they explain. Microreactors assist chemical reactions in extremely small - less than 1 millimeter - spaces and microprobes aid new drug engineering and manufacturing. Both allow researchers to closely control reaction speed, selective diffusion and processing, for example. Selective diffusion refers to how cell membranes decide which molecules to allow in or keep out.

Russell and colleagues say that functions in their new system can be directed with magnetic microparticles to accomplish this. They "control the locomotion of the droplets, and, due to the nature of the assemblies, can selectively transport chemicals from one droplet to another or be used as encapsulated reaction vessels, where reactions rely on the direct contact with air," Russell explains.

For this work, he and Xie collaborated with others from Hong Kong University, Beijing University of Chemical Technology and Tohoku University, Japan. Details are in Proceedings of the National Academy of Sciences.

Their technique relies on natural properties, Russell explains, in particular surface tension, the phenomenon that allows water-walking creatures and human-made robots that mimic them to avoid sinking. The researchers use it to bind heavier droplets, which would otherwise sink, to interfaces. This helps to build two-dimensional ensembles of structurally complex droplets that have sacs in which target reactions can be isolated.

They did this, Russell says, by hanging a coacervate-encased droplet of a denser aqueous dextran solution from the surface of a different, polyethylene glycol (PEG) aqueous solution. In their earlier work, Xie, Russell and colleagues used these same two polymer aqueous solutions, PEG-plus-water and dextran-plus-water, which can be combined but do not mix. This creates a "classic example of coacervation" forming two separate domains like the non-mixing wax-and-water in a lava lamp, Russell explains.

He says that up to now, synthetic systems in labs have been limited to far fewer reactions than natural systems in the body, which can carry out many rapid and serial reactions. More closely mimicking nature has been a major goal for years, he adds.

The new work represents a major advance, Russell says, because "we use a delicate balance between a surface energy and gravity to hang the sacs from the surface of the liquid, like some insect larvae, and the hanging sacs have direct contact with air through the opening in the top. Direct contact to air allows the user to introduce gases, like oxygen, for a reaction."

To imagine the new mechanism, he explains, it helps to know that polycations are materials with more than one positive charge and polyanions have more than one negative. "Think of the sac, the inside is a polyanion and the outside is a polyanion. This means that anions can flow out but not cations and cations can flow in but not anions. This selective diffusion allows us to do reactions inside the sac that feeds a second reaction on the outside of the sac and vice versa. So, we can produce cascading reaction schemes, similar to that found inside your body or other biological systems."