But a test would be only part of diagnosing and treating a patient. 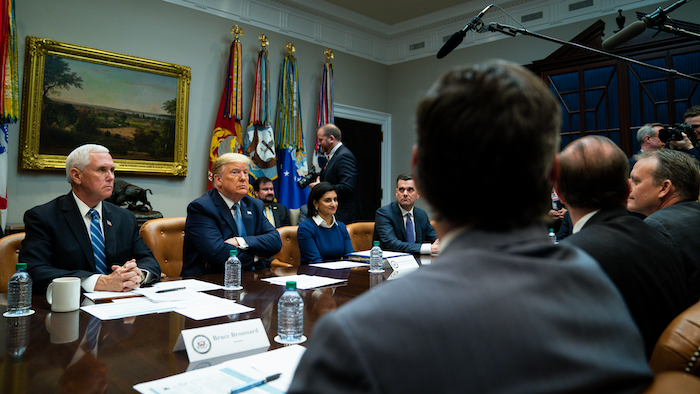 WASHINGTON (AP) — Major insurers pledged to cover coronavirus tests at no cost to patients at the White House Tuesday, but those assurances — while welcome — may not resolve public concerns about testing.

For one, insurers can't control the availability of the tests themselves. While the capacity for labs to test more patients is growing daily, the U.S. still has nowhere near the capacity for millions of tests that public health officials say are needed.

What's more, a test for the virus is only part of diagnosing and treating a patient. Other tests and scans may be needed, not just the coronavirus test. And if a patient requires treatment for viral illness, that would involve additional costs.

CEOs of major health insurance companies such as UnitedHealth, Anthem, and Humana, along with the leaders of industry trade groups like the Blue Cross Blue Shield Association, met with President Donald Trump and Vice President Mike Pence to underscore commitments that the companies have been announcing individually in recent days.

Pence said the industry representatives agreed that coronavirus tests would be covered at no cost to patients, and to cover telemedicine related to the outbreak.

Pence also said the CEOs had agreed to no surprise billing in connection with coronavirus, an assertion that raised questions since out-of-network “surprise” bills generally come from doctors and hospitals, not insurers.

Trump said, “I think tremendous progress is being made.” Insurers, he added, are “willing to do things for the people and their customers ... that normally I don't think they'd be doing.”

While people who suspect they've been sickened by the virus should not delay calling a doctor, insurance experts say consumers should still call their insurance plan as a follow-up to learn what medical services are fully covered and which ones may involve an out-of-pocket cost.

“The industry is not a monolith,” said Karen Pollitz of the nonpartisan Kaiser Family Foundation. “We don't have a rule yet that says all insurers must do ‘x,' so flip your insurance card over and call the 800 number.”

And as far as surprise billing, the White House may also have to get commitments from hospitals and doctors, who are the ones generally sending such bills. Surprise bills come when a patient is seen by a hospital or doctor not in the insurer's network. They may bill the patient for the difference between their list price and what the insurer is willing to pay.

The coronavirus test uses samples taken from the patient with swabs. The Centers for Disease Control and Prevention recommends at least two swabs, one from the throat and the other from the nose, where the virus tends to enter and cause an infection.

The samples are then sent off to a limited number of government, academic and private labs that can run the test.

The lab process can take roughly 4 to 6 hours. Altogether, it can take several days to ship a sample and receive the results back.

With older people considered a high-risk group for COVID-19 — the illness caused by the virus — Medicare is reminding the public that diagnostic lab tests ordered by a doctor are generally covered at no charge under program rules.

But copays and deductibles apply for outpatient imaging tests such as CT scans, and hospital stays are also subject to a deductible.