Scientists were able to measure ear processes by observing the katydid. 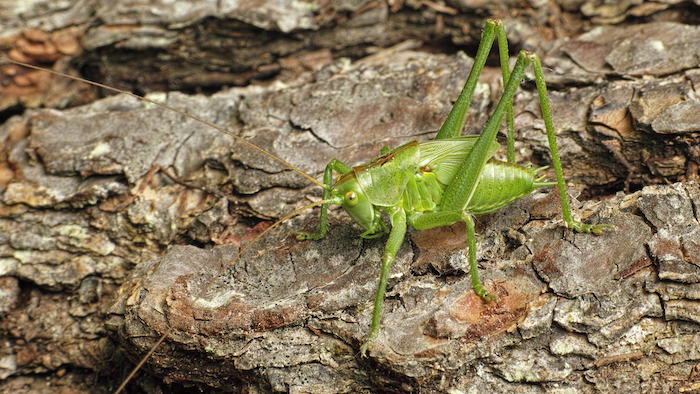 New research has found that bush-crickets' ear canals have evolved to work in the same way as mammals' ears to amplify sound and modulate sound pressure - and the findings could help scientists make better acoustic sensors for human use.

Bush-crickets are insects that depend on acoustic communication for survival, with the males singing to attract distant females. They have very small 'ears' in their forelegs, which work in a similar way to humans with an outer, middle and inner ear, and many species have transparent 'skins', enabling scientists to measuring ear processes.

An international team of sensory biologists and mathematicians found that the insects' horn-shaped outer ear, called the acoustic trachea tube, captures sound in the same way as mammals' ear canals by amplifying and transforming the pressure waves, which are then passed along to the surface of the eardrum to provide the animal with directional hearing.

Until now, the mechanism responsible for such changes in sound pressure levels which affects directional hearing has been unknown. The findings could revolutionize how auditory devices identify the location or origin of a detected sound, aiding the challenging design of wireless acoustic sensor networks used for monitoring and surveillance purposes.

The team carried out the study on a species called Copiphora gorgonensis, which are found in the Colombian rainforest. They used 3D x-ray imaging to capture the structure of the bush-cricket's ears, coupled with mathematical analysis to determine how the sound worked inside the acoustic tube.

The research was part of a €1.9million European Research Council-funded project led by Professor Fernando Montealegre-Zapata, an entomologist specializing in sensory biology and biophysics at the University of Lincoln, UK. It was carried out in partnership with the University of Bristol, and University of Graz in Austria.

Dr Emine Celiker, a Research Fellow in numerical modeling in the School of Life Sciences at the University of Lincoln, conducted the study. She said: "The research is the first step in using combined experimental and mathematical techniques to determine the mechanism crickets use to hear their species' songs.

"Our findings provide a strong indication that the bush-cricket ear processes sound in the same way a mammal's does, making its study vital for the development of new auditory sensors. We were able to take recordings of the auditory process using laser doppler vibrometry which measures the vibrations of sound waves on the surface of the ear canal.

"By applying mathematical modeling of the ears combined with real-life experiments, we also found that the ear canal filters out sound frequencies relevant to the species' survival, selectively amplifying only frequencies that are behaviorally relevant for the animals - like their mating song or the high-frequency calls of predatory bats.

"Traditionally it is well known that horns increase the volume of sound, and for bush-cricket hearing it has been suspected that this is also the case due to the geometry of its acoustic tube. We verified this after a thorough investigation of the processes involved in the sound amplification. The findings have huge potential to be applied in enhancing acoustic sensors such listening devices."

The findings have been published in Biophysical Journal.

The drugmaker announced in February a tentative $1.6 billion settlement to avert hundreds of lawsuits.
Oct 12th, 2020
Follow Us
Most Recent