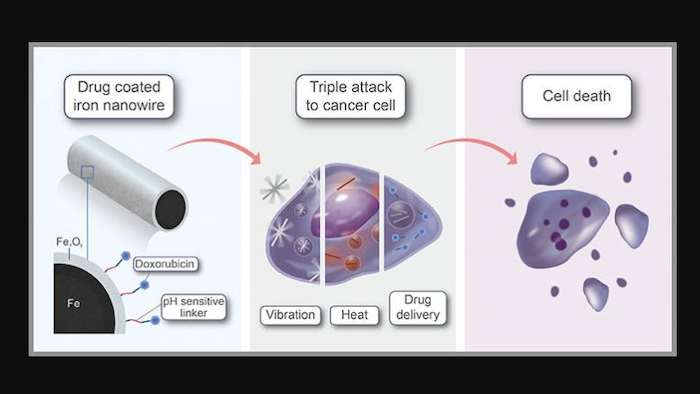 Drug-coated iron nanowires that can be guided to the site of a tumor using an external magnetic field before activating a three-step cancer-killing mechanism could provide an effective option for cancer therapy.

Co-developed by KAUST researchers, these nanowires release their drug cargo inside cancer cells, while also punching holes in the cell's membrane and delivering a blast of heat. While the combination therapy maximizes cancer cell death, its highly targeted nature should minimize side effects.

Iron was the obvious material to make the nanowires, says Jürgen Kosel, who leads the group at KAUST, which includes Jasmeen Merzaban and Boon Ooi, and who co-led the work with researchers from CIC biomaGUNE in San Sebastian, Spain.

The first consideration is safety. "Iron, in molecular form, is a native material in our bodies, essential for oxygen transport," Kosel explains. The nanowires comprise an iron core, coated with an iron oxide shell. "Iron-oxide-based nanomaterials have been approved by regulatory bodies for use in magnetic resonance imaging and as a dietary supplement in cases of nutrition deficiency," he says.

In addition to their biocompatibility, the magnetic properties of iron-based materials are a key benefit. "Using harmless magnetic fields, we can transport them; concentrate them in the desired area; rotate or make them vibrate, such as we did in this study; and even detect them through magnetic resonance imaging," says Aldo Martínez-Banderas, a member of Kosel's team. Applying low-power magnetic fields, the team agitated the nanowires in a way that opened the membrane of target cells, inducing cell death.

The additional advantage is that core-shell nanowires strongly absorb near-infrared light, heating up as they do so. Because light at this wavelength can penetrate far into the body, the nanowires could be heated using lasers directed at the tumor site. "The core?shell nanowires showed an extremely high photothermal conversion efficiency of more than 80 percent, which translated into a large intracellular heat dose," Martínez-Banderas says.

Finally, the anticancer drug doxorubicin was attached to the nanowires via pH-sensitive linkers. As the tumor environment is typically more acidic than healthy tissue, the linker selectively degraded in or near tumor cells, releasing the drug where it is needed. "The combination of treatment resulted in nearly complete cancer cell ablation and was more effective than individual treatments or the anticancer drug alone," Martínez-Banderas says.

"Taken together, the capabilities of iron-based nanomaterials make them very promising for the creation of biomedical nanorobots, which could revolutionize healthcare," Kosel adds. "While this might seem futuristic, the developments are well on their way."

The drugmaker announced in February a tentative $1.6 billion settlement to avert hundreds of lawsuits.
Oct 12th, 2020
Follow Us
Most Recent