Gov. Charlie Baker declared a public health emergency and ordered a temporary ban on the sale of vaping products in the state. 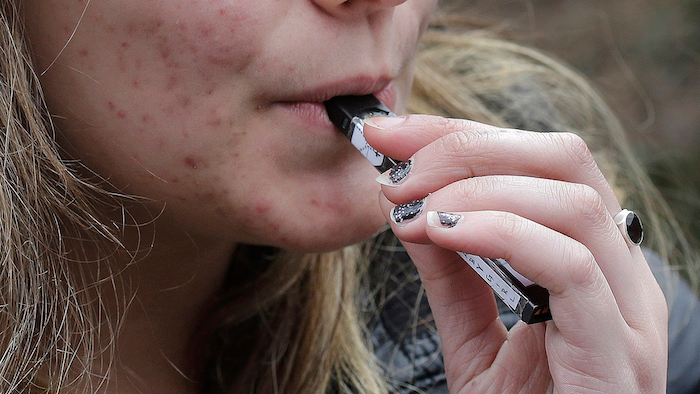 BOSTON (AP) — The governor of Massachusetts declared a public health emergency Tuesday and ordered a four-month ban on the sale of vaping products in the state, apparently the first action of its kind in the nation.

Republican Gov. Charlie Baker's order was quickly approved by the state Public Health Council and applies to all vaping products and devices. The ban, though temporary, is broader than moves in at least two states, Michigan and New York, to ban only vape flavors.

His announcement came amid growing concern about the health effects of vaping products, including deaths.

The administration said that as of Tuesday, 61 cases of potential cases of lung disease related to the use of electronic cigarettes and vaping in Massachusetts had been reported to the state.

Three confirmed cases and two probable Massachusetts cases of vaping-associated pulmonary disease have been reported to the U.S. Centers for Disease Control and Prevention.

"The use of e-cigarettes and marijuana vaping products is exploding, and we are seeing reports of serious lung illnesses, particularly in our young people," Baker said at a news conference at the Massachusetts Statehouse.

State health officials this month health began requiring the collection of data on potential cases of lung disease related to the use of electronic cigarettes and vaping in Massachusetts.

During the temporary ban, Baker said, the administration will work with medical experts and state and federal officials to better understand vaping illnesses and work on additional steps to address the public health crisis.

That, he said, could include legislation and regulations. The administration will also work on providing more resources for a public awareness campaign and smoking cessation programs, he said.

The CDC is investigating the outbreak but has not yet identified a common e-cigarette or ingredient. Nine deaths have been reported.

Dr. Anne Schuchat, of the CDC, told a congressional subcommittee Tuesday that she believes "hundreds more" lung illnesses have been reported to health authorities since Thursday, when the CDC put the tally at 530 confirmed and probable cases.

Michael Seilback, assistant vice president for state public policy at the American Lung Association, acknowledged the move by Massachusetts and said the federal Food and Drug Administration now needs to step up.

"From our perspective, it's the absence of strong federal action by the FDA that is forcing states to have to make choices like this on how they are going to protect children and adults from the public health emergency of e-cigarettes," he said.

Convenience store owners who rely on the foot traffic brought in by the sale of vaping products are going to be concerned by the decision, according to Jon Hurst, president of the Retailers Association of Massachusetts.

"There are clearly some issues there. The question is, what's the problem? Is it the product being sold on the shelves by companies like Juul, or is it the off-brand stuff coming from other countries and sold on the internet?" Hurst said. "I hope we can all work together and find out what is the problem and find a solution soon."

Democratic Massachusetts House Speaker Robert DeLeo said Tuesday that his legislative chamber is committed to addressing vaping and tobacco use among children.

The House is reviewing a bill that would ban the sale or distribution of any flavored tobacco or vape product to any consumer. The bill would carve out an exception for smoking bars.

"We look forward to collaborating with our partners in the senate and with the Baker administration to develop long-term, legislative solutions to these issues," DeLeo said in a news release.

A lawmaker in Rhode Island also plans to introduce a bill to ban the sale of flavored e-cigarettes in that state after the new legislative session begins in January.