They aren’t perfect replicas of human livers, yet. 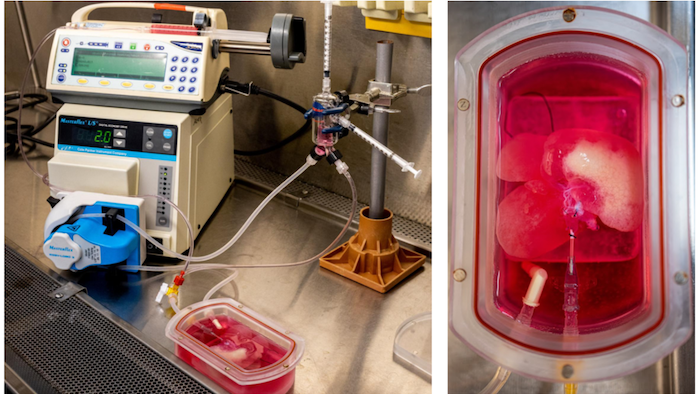 Left: The bioreactor. Right: A rat liver scaffold that has been populated with engineered human liver, vascular and inflammatory cells.
UPMC, CC BY-SA

Creating a human liver in the lab may sound a little like the work of Dr. Frankenstein. But actually, it is far from it. In my lab we’ve figured out how to control the genes and functions of that lab-grown organ and are using this tool to understand devastating diseases of the liver and test therapies.

Terminal liver failure causes about 30,000 deaths in the U.S. annually. So far, the only definitive treatment is liver transplantation but the shortage of donor livers is a limiting factor. The second cause of liver failure results from the progressive damage caused by alcoholic and non-alcoholic fatty liver disease (NAFLD). The number of people with this condition is growing rapidly in parallel with obesity and diabetes epidemics. To understand how this disease progresses researchers need models that mimic how the disease occurs in humans. But I think we may have solved that problem. Researchers in my lab have figured out how to grow a mini human liver.

I am a physician-scientist and my laboratory studies new approaches to understand and treat liver diseases. I first became interested in the liver during medical school in Mexico when a family member died of terminal liver failure.

After medical school I earned a Ph.D. in liver tissue engineering and regeneration. I then trained in China and Sweden to learn how to develop cell-based artificial organs. Finally I studied at Harvard Medical School where I learned how to rescue organs that were not useful for transplantation and use them to engineer liver tissue in the lab. After all those years, I landed a job in at the University of Pittsburgh, a worldwide hotbed for liver research.

How to Grow a Liver in the Lab

The liver is a particularly unusual organ in the human body because it is the only one that can regenerate. It also performs nearly 500 different functions, including processing chemicals or drugs, fat and all the nutrients you eat. And manufactures many essential molecules.

For the first time, my colleagues and I genetically engineered entire mini-human livers using induced pluripotent stem cells (iPS), a type of stem cell that can be generated from adult skin or blood cells.

You may wonder how you “grow” a human mini-organ from stem cells. So let me explain. We first collect adult skin cells from a healthy person and grow them in the lab. Then we genetically modify these cells to turn off a gene called SIRT1, which in normal livers is in charge of regulating fat metabolism and controlling liver inflammation.

The next step is a second genetic modification in which we add four specific genes that convert these adult engineered skin cells into iPS cells that have the potential to differentiate into almost any cell type of the body.

Once these cells have reverted to stem cells we let them multiply in large flasks until we have millions. Then we expose them to different growth factors to trigger their transformation into liver cells in a petri dish.

Finally, we take the engineered liver cells and introduce them into a rat liver in which all the rat cells have been removed, just leaving a structural scaffold made of natural substance called collagen. This provides a frame on which the human liver cells can grow and form a solid organ in a chamber made to support the growth of organs, known as a bioreactor. Here, we added other human cells into the bioreactor to induce tissue and vessels formation in the mini-organ. This process takes about 28 days.

When we are done we have a mini liver that measures between 5 and 7 centimeters across. It is pretty thrilling to watch this form in real time.

Mini-Livers are Similar to the Real Thing

The valuable aspect of our lab-grown mini-livers is that they mimic many aspects of human NAFLD and its progression to a more serious condition known as non-alcoholic steatohepatitis, or NASH. This will allow us and other liver researchers to study the disease process and figure out how to intervene.

Because we genetically modified the liver cells to lower the activity of the SIRT1 gene – which usually regulates fat storage and metabolism – the human mini livers started to mimic the metabolic dysfunction observed in tissues from patients with fatty liver disease. These organs started accumulating fat, turning yellow as the fat levels rose in the cells. For me, watching this organ change was the most exciting part.

After four days of suppressing the SIRT1 gene in the mini-livers, we ran several tests to understand how fat is processed, how other fat-processing genes were behaving and how the liver cells look under the microscope.

We found that about 80% of the deficiencies in processing fat observed in patients with fatty liver disease were present in our engineered human fatty mini-livers. I find this exciting because it means that we can create realistic livers that are similar to patients’ livers which we can use to test new therapies or find new markers of disease.

So what is the point of growing a mini-liver? I and my colleagues believe it will be a valuable tool for testing candidate drugs. In some cases these mini-livers may be more accurate than mice for figuring out whether a drug will be effective in humans.

For example, several years ago in pre-clinical tests, animals with fatty liver disease were given the pharmacological agent resveratrol, a molecule present in grapes and red wine that enhance the functions of SIRT1 gene. This successfullly reduced fat accumulation in mice and implied it might do the same in humans with fatty livers.

However, human clinical trials were inconclusive. But when our human fatty mini-livers were treated with resveratrol we found that it had no effect on fat accumulation. The conflicting results in humans and mice may be due to interspecies differences between the disease in people and the disease in current animal models of non-alcoholic fatty liver disease. This underscores the value of lab grown organs created with human cells.

My group designed the current study to modify the expression of only one gene, simplifying this complex disease, to understand non-alcoholic fatty liver disease and its progression to NASH. In future experiments, I plan to control the function of many genes simultaneously.

Our mini-livers aren’t perfect replicas of human livers. We were unable to mimic all the important characteristics of NASH, and these mini-livers did not completely mature when compared to an adult human liver. So I and my colleagues will continue to explore how to modify these livers to make more accurate replicas of this amazing organ.

This article is republished from The Conversation under a Creative Commons license. Read the original article here: http://theconversation.com/how-to-grow-human-mini-livers-in-the-lab-to-help-solve-liver-disease-121297.