The hope is to design better back supports. 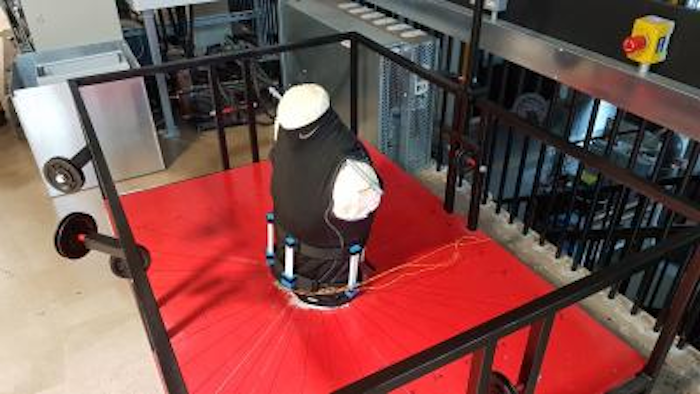 Engineers have for the first time created a simulator mimicking the mechanical behavior of the human torso - which could lead to innovations in the design of medical back supports.

It allows researchers to test different back brace designs and configurations without needing to test them on people - removing significant logistical and ethical issues.

The simulator includes a male torso-shaped mechanical test rig, alongside computer simulation models. It includes an artificial additively manufactured (also referred to as 3D Printed) spine and rib cage, created using modified CAD models derived from CT scans of a human spine, and a torso with geometries and other properties that closely resemble and behave like human tissues.

The rig also allows for different spine configurations and deformities, such as scoliosis, to be modeled and tested with different back braces without causing discomfort to human testers.

Researchers can use the rig to collect data on the reduction of flexion, extension, lateral bending and torsion each back brace design provides.

Although human testing of back braces would eventually be required, it will be further down the design process to help optimize comfort and muscle engagement.

Dr David Cheneler, part of the Lancaster University team of Engineers that created the simulator, said, "Back braces have been used as both medical and retail products for decades, however existing designs can often be found to be heavy, overly rigid, indiscrete and uncomfortable.

"Our simulator enables new back braces to be developed that are optimized to constrain particular motions but allowing for other movements. It could also help with the design of braces and supports with targeted restriction of movement, which would be beneficial to some conditions and helping to reduce the risk of muscle-loss."

The researchers tested the rig with two novel back brace designs, an existing medical back brace as well as a weightlifting belt.

Jon Harvey, who recently graduated with a MEng in Mechanical Engineering from Lancaster University and who worked on the back brace project, said, "This is an excellent example of how engineering research can have wide reaching impact, not only in industry, but also in the quality of life of a population. It also shows how research is used to enhance engineering education at Lancaster University."

The research, funded by the Engineering Department at Lancaster University, has been outlined in a paper Experimental Platform to Facilitate Novel Back Brace Development for the Improvement of Spine Stability, which has been published in the journal Computer Methods in Biomechanics and Biomedical Engineering.