The company unveiled a youth version of the helmet last year with an influx of funding, including contributions from Aaron Rodgers. 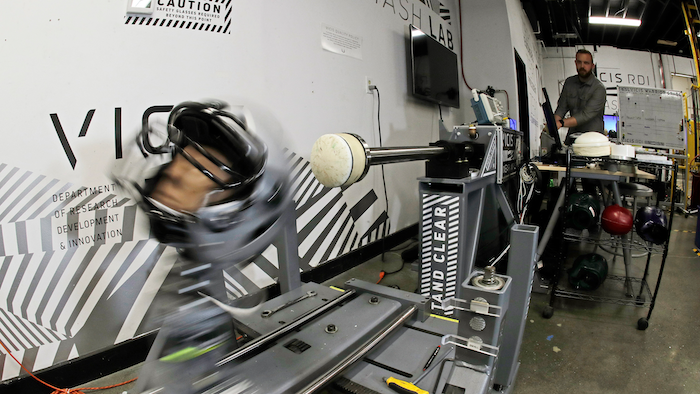 In this photo taken May 23, 2019, Ryan Smith, a test engineer at VICIS, a Seattle-based company that makes football helmets, runs an impact test on a helmet in Seattle. The company's latest offering is the ULTIM cap, which is intended for use with youth flag football and competitive 7-on-7 football played during the offseason for youth and high school programs.
AP Photo/Ted S. Warren

SEATTLE (AP) — The company that produces the top-rated helmet for NFL players and introduced a youth version of the headgear is rolling out a version for flag football (view photos in gallery).

Seattle-based VICIS already produces the helmet that rated best for three straight years at reducing head impact severity, according to testing conducted by the NFL and the NFLPA. The company unveiled a youth version of the helmet last year with an influx of funding, including contributions from Aaron Rodgers.

Next up: A rapidly growing area of football with little innovation to date in the area of head protection.

It was the goal of VICIS when it first developed its Zero 1 helmet to eventually fill out its entire portfolio by adding the youth helmet and eventually a product for flag football.

"When we first started the company, we realized not everyone was playing tackle football, especially the kids. And we wanted to be able to protect as many athletes as possible," Marver said. "That's our mission. That's what drives us. We started at the professional level because we really could prove the technology and as quickly as possible we wanted to cascade down into the younger reaches of the sport."

Most of the current headgear used for flag football and 7-on-7 competition has been made of stiff foam. VICIS couldn't use the same columns it uses in its football helmets to make a soft product viable, but was able to transfer some of the protective technology in the new headgear.

The company put the new product through the same testing as its tackle football helmets — both the NFL/NFLPA tests, and Virginia Tech's helmet lab that has conducted helmet testing across multiple sports since 2011. Virginia Tech is expected to test 7-on-7/flag football head protections for the first time this year.

VICIS also partnered with a training facility in the Seattle area that operates several 7-on-7 teams for on-field testing.

"We want to make more protective products, but we also want to make them cool and interesting and stylish so the young athletes want to wear them. That is what I think we've done here," Marver said.

With its football portfolio completed, VICIS is expected to expand into other sports. While not ready to make any announcements, Marver hinted the next venture is, "likely to go into a sport played on ice." The VICIS headquarters are a short walk from where Seattle's new NHL franchise will play its home games.

The president asked intelligence officials to “redouble” their efforts — including any possibility the trail might lead to a Chinese lab.
May 26th, 2021

A mysterious advertising agency offered to pay users if they agreed to smear Pfizer’s COVID-19 vaccine with negative fake stories.
May 26th, 2021

Its vaccine could become the second option for that age group in the U.S.
May 25th, 2021
Follow Us
Most Recent