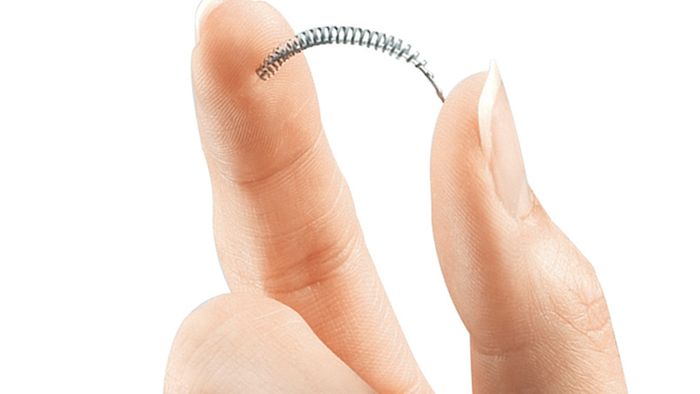 The maker of a permanent contraceptive implant subject to thousands of injury reports and repeated safety restrictions by regulators said Friday that it will stop selling the device in the U.S., the only country where it remains available.

Bayer said the safety of its Essure implant has not changed, but it will stop selling the device at the end of the year due to weak sales.

The German company had billed the device as the only non-surgery sterilization method for women. As complaints mounted and demand slipped, it stopped Essure sales in Canada, Europe, South America, South Africa and the United Kingdom.

The U.S. Food and Drug Administration has placed multiple restrictions on the device following patient reports of pain, bleeding, allergic reactions and cases where the implant punctured the uterus or shifted out of place.

In May, the FDA said doctors must show women a checklist of the device's risks before implanting it.

One of them, Amanda Rusmisell, of Charlotte, North Carolina, said she's "immensely thrilled" by Bayer's action. Rusmisell said she got the device in 2008 and developed severe pain and bleeding. She took part in patient-organized rallies accusing Bayer for not disclosing potential risks and said, choking back tears, "Our very grassroots effort has worked."

Bayer received FDA approval to sell Essure in 2002 and promoted it as a quick and easy permanent solution to unplanned pregnancies. Essure consists of two thin-as-spaghetti nickel-titanium coils inserted into the fallopian tubes, where they spur the growth of scar tissue that blocks sperm from fertilizing a woman's eggs.

Because of the reported complaints, the FDA added its most serious warning to the device in 2016 and ordered the company to conduct a 2,000-patient study.

FDA Commissioner Scott Gottlieb said Friday the agency would work with Bayer to continue the study, but noted "Bayer will not be able to meet its expected enrollment numbers" for new patients. The study was designed to follow patients for three years to better assess complications.

More than 750,000 women worldwide have received Essure. Demand has declined in recent years and plunged 70 percent after the 2016 boxed warning, the FDA said.

Gottlieb said the FDA will continue to monitor adverse events reported to its database after Essure is removed from the market.

"I also want to reassure women who've been using Essure successfully to prevent pregnancy that they can continue to do so," he said. Those who think it's causing problems, such as persistent pain, should consult with their doctors, Gottlieb added.

But many women have attributed other problems to the implant, including mood disorders, weight gain, hair loss and headaches. Those problems are listed in the current FDA labeling for the device, with the qualifier: "It is unknown if these symptoms are related to Essure or other causes."

Informational material Bayer supplied to doctors and patients lists potential problems and says the devices are meant to be permanent. It also says removal may require complicated surgery, including a hysterectomy, that might not be covered by insurance.

Gottlieb noted that device removal "has its own risks."

Diana Zuckerman, president of the nonprofit National Center for Health Research, said Essure is among medical devices approved without "clear evidence of safety or effectiveness."

"As a result, when thousands of women reported serious complications from Essure, there was no unbiased long-term research to refute or confirm those reports," Zuckerman said. "If patients had been listened to when the first clinical trials were conducted on Essure, better research would have been conducted to determine exactly how safe and effective Essure is."

Dr. Kristyn Brandi, a Los Angeles family planning specialist, called Bayer's move disappointing. She says most of her Essure patients have been satisfied.

"I would hope Bayer would use this opportunity to think about future research and product development," Brandi said. "Being able to offer women contraception that's permanent without surgery is a really great option."

Bayer spokeswoman Courtney Mallon said the company had no plans to re-design the device.

Kate Nicholson, of Dallas, got an Essure implant last year after she and her husband decided not to have children. She said she sympathizes with women who have had problems but said ending Essure sales is the wrong move.

"Pulling it from the market is yet another way to limit our choices about our own bodies," Nicholson said. "I personally always had horrible experiences with different versions of 'the pill,' but it's still on the market and many women swear by it."

The president asked intelligence officials to “redouble” their efforts — including any possibility the trail might lead to a Chinese lab.
May 26th, 2021

A mysterious advertising agency offered to pay users if they agreed to smear Pfizer’s COVID-19 vaccine with negative fake stories.
May 26th, 2021

Its vaccine could become the second option for that age group in the U.S.
May 25th, 2021
Follow Us
Most Recent